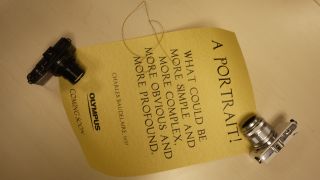 Is Olympus going to send out an odd message every time a new product is launched?

After the mystery package of nuts received a couple of weeks ago, Olympus is up to similar tricks, sending out mysterious scrolls.

Arriving in a large package this morning, unravelling the scroll revealed a quote by Charles Baudelaire which says " A portrait! What could be more simple and more complex, more obvious and more profound."

Either Olympus has been eating something dodgy, or this is a thinly veiled attempt to highlight the new 75mm portrait lens that was known to be in production some time ago.

Earlier in the year, Olympus revealed it would be producing two new lenses for its Micro Four Thirds lenses - the 75mm f/1.8 portrait lens and 60mm f/2.8 macro lens.

We already know that the lenses will feature the same metal build quality as the existing 12mm f/2.0 M.ZUIKO wide angle lens.

Both of the lenses were said to be made available in the summer of 2012, but the mystery scroll appears to refer only to the 75mm lens.

It was only a few days after the nuts arrived in the post that the latest Olympus tough camera was revealed, so we can probably expect a full, official announcement containing specs and prices in the next few days.

Stay tuned for more as it, er, unfurls.