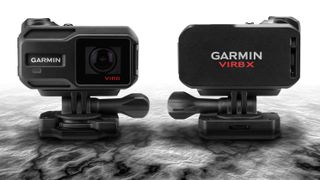 Garmin has announced two new action cameras, the X and XE. These are an evolution in design over the first generation with enhanced features and a complete redesign in both looks and control.

The X and XE look identical and have a very similar feature set, but the XE (Elite) version has a higher maximum resolution, frame rate and price. Both new models feature Wi-Fi, GPS, an accelerometer and Full ANT+ sensor capabilities – ANT+ is a wireless standard that enables the cameras to gather data from other devices such as heart monitors.

The new design is completely different to the previous generation, and while the 'Virb' name continues many of the design elements such as the screen, sliding on/off switch and the need for a waterproof housing if used in water have all gone. In addition, the original bullet-style body has been replaced with a more rectangular design.

Not just video, but video with data

Garmin's unique selling point is GPS and this feature will appeal to anyone involved in outdoor activities and already familiar with GPS devices. But these cameras go further. There's now a gyroscope as standard, and Garmin's G-Metrix technology uses this built in sensor to show speed and G-Force in animated overlays when viewing data back through software.

GPS and ease of use were major selling points for the Virb and Virb Elite, but for those who wanted a camera that could withstand the elements, the first generation was just a little too refined, especially the Elite version with its white case. However the X and XE have been built from the ground up to be smaller, lighter and waterproof without an additional case. In fact they can be used down to an impressive 50m depth, which compares well against the GoPro Standard housing (40m).

Resolution and frame rates are key specs for an action camera – you need a good high resolution to capture the fine detail and high frame rate so that it's possible to play back footage in smooth slow motion.

Pro video options are starting to become important for action cams and Garmin follows the trend enabling a 'Pro' mode for adjusting white balance, ISO, sharpness, exposure, and colour profile. Garmin has also added a multi-camera sync feature that uses a GPS timestamp and works within the Virb Edit software.