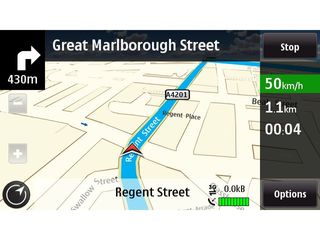 TomTom may have just signed up Darth Vader but Nokia is massaging egos the world over, with news that it is to allow you to record your own voice for its turn-by-turn navigation service.

Prefect for those who like the sound of their own voice, the aptly titled Own Voice app allows you to lend your dulcet tones to the 53 simple step-by-step processes found in the Ovi Maps sat nav.

Once you have recorded your oral masterpiece, then you hit save and the whole thing will be ready for you at to the Own Voice website.

If you don't fancy doing one yourself, then there are a number of user-generated voices to choose from on the website.

For instance, you can have angry Charlotte who will bark orders at you like a nagging girlfriend, which sounds a bit too close for home to actually be any fun.

There's also one called the Reaper, which allows you to take instructions from someone who sounds, well, like Death.

Nokia's Ovi Maps service launched back in February and is proving quite popular. In its first week of launch, the free app was downloaded over a million times.

Since then, Google has announced its own free navigation service for Google maps.