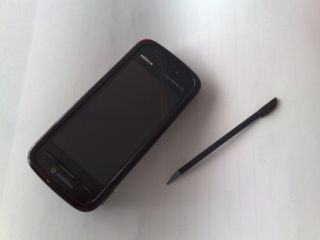 The Tube could finally be arriving

Nokia’s marketing department isn’t going to be happy when they see the pictures of the company’s new phones splashed all over Flickr.

The main talking point is the pictures of Nokia’s touchscreen device (codenamed 'Tube' in all the rumours, now appearing as the 5800 XpressMedia).

It seems the new phone will rock a 3.2MP camera, a dual-LED flash, and obviously the new touch S60 UI.

Another interesting feature is Vodafone branding - are the UK-based network behemoth hoping this will be their iPhone?

The Flickr account (which has been mysteriously deleted) also showed off some snaps of the Nokia N85 and N79, though these both were codenamed “N00” on the spy shots, which means the actual model numbers aren’t finalised yet.

Both come in white and black, and the N85 (rumoured to also be called the N88, confusingly) looks a fair amount like the soon-to-be-released N96, Nokia’s flagship phone.

Of course, as with any spy pics, they could be completely fabricated. But why give them “N00” model numbers?