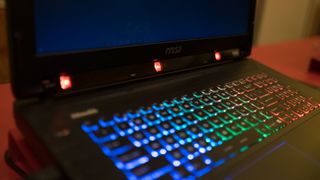 Let's be real: whether a fresh feature within a tech product is considered a "gimmick" depends entirely on how it's received. MSI's latest spin on the gaming laptop, the MSI GT72S G Tobii with eye-tracking technology (seriously) may very well have a chance of finding legs.

The tech is built into the massive laptop's hinge and allows you to control certain functions across Windows 10 and within games using just your peepers. For instance, you could switch targets in a shooter game, select objects on the floor in an adventure game or even pause a game by simply looking away.

It's about more than just control

MSI's partnership with Tobii brings the capabilities of the firm's Tobii EyeX device into one of its leading laptops, but its uses stretch beyond picking up a gun in a first person shooter. MSI and Tobii promise that the tech will allow gamers to enhance their streams through supported platforms, like XSplit Gamecaster.

The dual lens near-IR illuminators built into the hinge can capture your eye movements under any lighting condition, allowing viewers to see your perspective of the games you're streaming as well. You can also consider this gaming laptop just that much more secure, with Windows Hello supported through Tobii.

We had a chance to check out the GT72S G Tobii for ourselves back at CES 2016, and the tech worked rather flawlessly. In his hands on review, techradar computing editor Kevin Lee said using Tobii "was like I had a third thumb," though "the whole experience is more natural than it sounds."

(Hey, at least it requires less effort on the player's part than that Leap Motion tech no one is talking about now.)

However, it's important to point out that the list of games supporting the tech is rather small at the onset, with Assassin's Creed Syndicate and Rogue, ArmA III, Elite Dangerous, The Division and a few others offering official support – the latter of which when it releases later in March. (GTA V works with Tobii, too, though after a bit of modding.)

So, while the tech works seamlessly and shows quite a bit of promise, its success will depend more on PC game developer support than anything. Well, at least the GT72S G Tobii has a 2.9GHz Intel Core i7-6820K processor and a Nvidia GTX 980M GPU with 8GB of DDR5 VRAM in the priced configuration to attract the power-hungry PC gamers. (Not to mention 32GB of DDR4 RAM, plus a 256GB solid-state drive with another 1TB hard drive).

And that all sits behind a sharp, 17.3-inch 1080p screen. Oh, and a bundled copy of Ubisoft's The Division should help seal the deal – but we'll be the judges in our forthcoming full review.