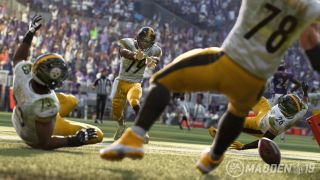 Madden NFL is an industry staple. It comes out every year without fail - and, barring a few minor missteps every season - always improves the franchise.

As expected, Madden NFL 19 will ship later this year, delivering a new entry full of tweaks and upgrades both large and small. EA Sports has announced a few of these features so far, and we got our first hands on time with the game in July.

The marquee changes this year revolve around Madden Ultimate Team (MUT) and a plethora of new online single-player challenge modes that will keep you engaged throughout the season. We'll cover them in more detail down below, but look forward to 3-v-CPU MUT Squads, MUT Champions tournaments and Solo Battle modes that put you in control of community-submitted MUTs.

Playing Madden for a story? Don't worry - Longshot Homecoming continues the stories of Devin Wade and Colt Cruis with appearances by none other than the G.O.A.T. Tom Brady and the NFL's Good Morning Football crew.

Can't wait to get your hands on the next Madden? Here's everything we know about Madden NFL 19 and when it's coming out, as well as what we hope to see from it.

Madden NFL 19 will release on August 10, 2018 for both PlayStation 4 and Xbox One. In addition to the standard edition of the game, EA Sports will release a special Madden NFL 19: Hall of Fame Edition that lets you choose between Elite Legends players Terrell Owens (also the Hall of Fame edition cover athlete), Brian Urlacher, Rod Woodson, Dan Marino, or Terrell Davis for your Madden Ultimate Team.

E3 2018 brought a brand new trailer for Madden NFL and you can watch the bone-crushing action below:

While gameplay changes are definitely coming to Madden 19 (see the next point), we'd argue that the big game-changers are actually the new MUT Modes. Squads started out in Madden 18 and only allowed you to face off in 3-v-3 battles online. This year, you can play 3-v-CPU matches that should make it easier for new players just jumping into Madden's online modes for the first time. MUT Champions, on the other hand, will see you competing with other MUT players to claim the top spot during weekly tournaments. To earn extra coins to power your teams, you'll compete in Solo Challenges and Solo Battles, two modes that put you in charge of community-submitted MUTs as you attempt to lead them to victory. We got a chance to play all three of these modes at an event down at EA Redwood Shores and walked away feeling more confident in the Madden franchise than we ever have.

EA Sports has teased enhancements to the way you play Madden, promising “more control and responsiveness” along with “fresh gameplay concepts.” After trying that for ourselves, we'd say we have to agree. A big change for the gameplay comes by way of the Frostbite Engine that now drastically improves the handling of the run game. Players will be able to shirk off blocks more easily this year, and control players with more precision when they get into the midfield. That leads us to...

After debuting in FIFA 18 last year, EA Sports will implement Real Player Motion technology in Madden NFL 19. What does that mean? Well, it sounds like we'll see a greater emphasis on realistic player animation in all phases of the game, which will not only look more realistic but potentially also impact the way you play the game.

For example, EA says that as ball carriers, players will be able to push blockers ahead of them to gain extra yards rather than try to sneak around them—and you'll be able to zoom down the field and stop on a dime to cut through defenders. We'll have to see how much of an impact those tweaks have on the pro-game, but surely the newly-enhanced touchdown celebrations will be a fun upgrade.

The card-driven Madden Ultimate Team mode has become the franchise's core draw for many players, and it's the mode used in the official Madden Ultimate League esports league.

This year's edition promises more NFL legends in the mix, including Hall of Fame Edition cover star Terrell Owens, along with a new kind of progression system. Additionally, Solo Challenges will be available, alongside a new MUT Solo Battles mode that provides unique rewards via a leaderboard system.

Fans have been asking for big Connected Franchise mode enhancements after little change in last year's game, and EA Sports seems set to deliver on that. The official Madden NFL 19 website says that the mode will provide “unparalleled control” over teams.

According to EA, you'll be able to choose your offensive and defensive schemes in both single-player and online seasons, plus a revamped progression system lets you try to make a big push now or build towards future franchise success. Meanwhile, a Custom Draft Class Creator—a fan-requested feature, says EA—will also we added in this year's game.

Madden NFL 18 introduced EA's powerful Frostbite game engine for the first time, and the differences were immediately obvious: the game both looked and felt way more fluid, and that was just the first year of its inclusion.

Now EA Sports says that Madden NFL 19 will “flex more of the Frostbite muscle” to deliver “broadcast-quality graphics” during games. The initial screenshots look good, of course, but we want to see some actual gameplay footage. We'll be excited to see how great it looks on the Xbox One X and PlayStation 4 Pro, especially.

In May, Madden creative director Max Dickson departed Tiburon after six years in the role, claiming that it was a mutual decision between himself and other team leadership. As part of that move, he suggested that it would “[give] the team, the community and the Madden franchise a chance for a new direction.”

Time to confirm the rumors. I have left EA Tiburon and the Madden team. Statement below. pic.twitter.com/4eiJlrkxUUMay 3, 2018

Granted, that was three months before Madden NFL 19's release, so it's unlikely that we'll see major changes in the mix. Still, it'll be interesting to see if the final product feels like it has a different tone from previous entries, or if we're likely looking still looking ahead to more substantial changes in the future once the new leadership gets started on the next entry.

What we want to see from Madden NFL 19

The Nintendo Switch is a sensation, and third-party developers that had cooled off on the Wii U have been coming back into the fold. Given that, why isn't there a Nintendo Switch version of Madden on the table?

EA Sports released FIFA 18 for Switch last year to solid reviews, although the lack of some features made it seem much inferior to the PS4 and Xbox One editions. Hopefully EA will reveal an incoming Switch version of Madden NFL 19 in the coming months—and debut a Switch edition that has feature parity with the others.

The Madden Ultimate Team mode lets you build a dream team using a mix of players from different teams… so why doesn't it let you do the same with the playbook? Casual players might not care enough to mix and match, but die-hard enthusiasts would cherish the ability to build up their own custom sets of plays. That would really help elevate Ultimate Team mode.

Madden NFL 18 introduced the Longshot story mode, letting you guide an NFL prospect from a child to a high school and college player, all before ending up on the big stage. For a first effort, it was actually pretty great—compelling, unexpectedly emotional, and certainly worth experiencing at least once.

EA Sports hasn't announced its return for Madden NFL 19, but seeing as FIFA's story mode has appeared in its last two entries, we're hopeful for another Madden narrative experience. We'd like to see a bit more flexibility and customization in the mix, and hopefully more replay value as a result—but even something with the same tight scope as Longshot would be great.