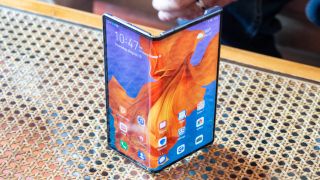 Huawei's Mate X folding smartphone has been a long time coming but it may be nearing its full release now, and we know that thanks to a leaked unboxing video that has appeared online.

The unboxing was uploaded to YouTube by account Kim Poh Liaw, and while we can't confirm its accuracy it looks to be a similar box to what we expect from Huawei, and the phone itself is similar to what we've seen in the past.

However, the device in the video now comes with a button to unlock the folding display, which wasn't present on the Mate X when it was announced. You can watch the short unboxing video below:

Huawei hasn't been entirely clear about the release date for the Mate X, and the current statement from the company says the device will be launching between September and November this year.

That suggests the company has six weeks left to get the device on sale, but it's currently unclear where it will be first available.

We can assume that China will be the first place you're able to buy the Huawei Mate X considering that's the company's main market, but it has yet to confirm if the foldable will come to the UK, US or Australia.

It's unlikely to come to the US after the Huawei ban situation, while those in the UK and Australia may be able to buy the device but without Google's services on the phone, so it may be hamstrung without access to the Google Play Store.