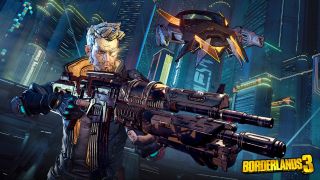 If you’re making a game that revolves around not only shooting guns, but compulsively chasing the acquisition of better ones, those guns had better be good.

That seems to go without saying – you wouldn’t play a driving game with rubbish cars to fill a digital garage with, or a role playing game that was asking you to invest in a rote story. But in the looter shooter genre, that principle seems to have been forgotten.

From the bland assault rifles of The Division 2 to the ‘meh’ space guns of Destiny to Anthem’s… well, relatively little of anything, the looter shooter has a loot problem.

Once that loop has sunk its teeth into you, there’s no shaking it. That sense of overcoming adversity, returning to take on once-challenging enemies with improved gear, is incredibly satisfying. It’s a mirror to life in microcosm – face a tough challenge, overcome it, and be ready for what comes next with a renewed sense of vigour.

The RPG roots of the genre played into this loop nicely, by virtue of the fact that RPGs, traditionally, have leaned primarily towards high-fantasy fare. For those creating fantasy stories, they’re not limited by real-world constraints, just the limits of their imaginations. So, to once again use Diablo as an example, where you may start the game in a loin cloth with a rusty axe, by the end of the game you look like an angel of death, in resplendent armour impervious to the heat of flames, armed with a nine-foot warhammer sending out shocks of lightning that would make Thor blush.

The po-faced Anthem and Division games seem to have missed this point, with weaponry that sticks too close to the military format to truly wow you. It’s particularly disappointing coming from Anthem developers Bioware, perhaps the company that has done more than any other to further the cause of fantasy RPG gaming over the decades.

I recently went to the first hands-on session for Borderlands 3 at an event in LA. I’d been a little concerned that, despite having been arguably the first series in the looter-shooter genre, Borderlands 3 would see the franchise having lost ground to its flashy new rivals. And while it is very much still more Borderlands (no bad thing, of course), it very much hasn’t fallen behind the competition.

Why? Its loot. Three mainline games and a number of spin-offs into the series, and developers Gearbox now confidently can put together batshit crazy weaponry that you’re yearning to discover.

Borderlands 3’s weapon loot is broken down by fictional in-game brand, and numerous one-off special weapons. Each has its own set of stats (damage, accuracy, reload time – standard fare like that), but can also have ‘elemental’ damage modifiers, ranging from incendiary effects to radioactivity. Then, on top of that, each brand’s weapons has its own special abilities: Jakobs guns have bullets that ricochet towards other targets; Atlas weapon projectiles follow and chase enemies; Hyperion guns have built in weapon-mounted shields; Tediore guns are tossed after each reload before turning into little spider-like turrets that pursue your attackers.

That’s to just name a few, and that’s before you get to the truly madcap one-off unique weapons.

During our time with the Borderlands 3 demo, we got to play with one of the most ridiculously fun weapons we’ve ever shot in a videogame, the Smart-Gun XXL.

It’s a weapon that lives up its name, dropped by a boss called Gigamind, a pint-sized pest who is essentially a disembodied brain (complete with googly eyes) placed in a goldfish bowl on top of a spacewalk suit. The Smart-Gun XXL does acidic damage to your enemies with a rate of fire seen in the game’s sub-machine guns. That’d be satisfying in and of itself. But as it’s a Tediore weapon, it gets that brand’s unique spin – reload the weapon and you toss it away, this time turning into a brain walking on mechanical legs. Once that brain gets close to an enemy, it explodes in a rain of green, corrosive goo.

It’s absolutely crazy, and gives a flavour of the no-holds-barred creativity that is going into the design of Borderlands 3’s truly satisfying weaponry. It’s just the tip of the iceberg too – check out our buddies at PC Gamer for their pick of Borderlands 3’s best guns.

There’s been a lot of talk here about the joy of shooting, so before we go any further, I want to reassure you that I’m no gun nut. There’s enough gun violence in the world to do without us fetishising it. It’s what tends to turn me off military shooters like The Division 2, where its weapon set more closely resembles real-world death dealers. It’s a mechanically sound game, but it’s less interesting to me as its loot is less inventive, being modelled on real world licensed models. Not only that, but it’s troublingly venerated too – as Devin Coldewey expertly articulates in an article for TechCrunch, The Division 2 is purposefully apolitical in its representation of the violence guns deal.

“The decision to completely divorce a game with fundamentally political underpinnings from the real politics and humanitarian conditions that empower it is a sad and spineless decision that makes [developer Ubisoft] look both avaricious and inhumane,” he said.

Borderlands doesn’t have this issue by design – its zany visuals and loony equipment remove it from reality in the same way that Star Wars’ blasters allow the original trilogy to comfortably sit with a child-friendly rating. (Not that Borderlands 3’s gore will let it get away with anything other than an adults-only rating, of course). Whether the stylised setting was consciously chosen to avoid real-world controversy or just a happy coincidence, I don't know. Borderlands 3 benefits either way as a result.

But it does make it easy to enjoy its ‘gazillion’ guns without a lingering sense of guilt. Is that healthy, to ‘normalise’ or blunt the emotional impact of death by making those tools facilitate dealing it beyond belief? That’s a tough one, but it’s a question you’d have to ask of Star Wars, Star Trek and other sci-fi action franchises too in that case.

Borderlands 3’s bigger problem, from a gameplay perspective, may prove to be the sheer volume of weaponry it throws at the player. With some 1 billion weapons in the game, many will be the product of randomised generation, with a few extra decimal places in stats being the main differentiator between the different models. Borderlands games have never suffered from a lack of weapons, but sorting through the ones that are really worth your while has felt like a chore at times, and there’s the creeping feeling that Borderlands 3 may suffer here too.

There’s still much to find out about Borderlands 3. It’s set to be the most expansive game in the series, spanning multiple planets and with four highly customisable character classes to play as. You get your own freaking space ship and crew, if the scale and the ambition of the thing was in any doubt. Will all these pieces come together cohesively? Here’s hoping, but one thing’s for certain – your trigger finger is about to get a workout.