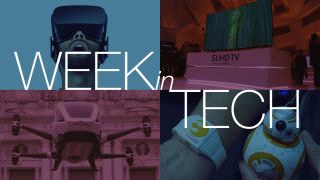 This week was all about a three letter acronym. No, not WTF. We mean CES, the annual consumer electronics show where manufacturers show off their brightest ideas and try to persuade us that this year really is the year of the internet fridge. Not only that, but we've also got bad news for monkey photographers and some really interesting news about a puddle. It's an exciting and ever so slightly weird week in tech!

It's that time of year again: CES, when the tech world's biggest names show us what we'll be getting excited about in 2016. There were so many new products that just listing the highlights here would take thousands of words, so we'll link to our round-up instead: you'll find details of stunning 4K HDR and even 8K TVs, wore wearables than you can strap to your wrist, tablets and PCs and cameras and 98-inch displays and all the exciting new technology you could ever possibly wish for. From in-car entertainment to awesome home cinema rigs, tiny trackers to incomprehensible acronyms, if it's interesting and electronic you'll find it all in our guide to the very best of CES.

We traveled to CES in style with a semi-autonomous Mercedes-Benz S550, but our wheels weren't quite as exciting as the Faraday Future FFZERO1, the electric car from the firm many people believe is a front for Apple. The company's production car is likely to be more saloon-y than Batmobile-y, unfortunately.

While car tech was everywhere at CES, there were plenty of flying machines too. One of the most interesting was Parrot's new Disco, which drops the familiar quadcopter design for something more like a traditional aeroplane. It has autopilot, too.

The VR starting pistol was fired at CES by Oculus, whose pre-orders started this week. We hope you've been saving your pennies, because the Oculus Rift headset will be US$599 (£499, AUS$649) – although it'll be free to the first round of Kickstarter backers. HTC showed off its latest Vive Pre too, although it hasn't announced prices just yet. We put it through its paces and enjoyed the experience immensely. In a word, the experience is "awesome".

If you're a turntablist, the most exciting announcement at CES had to be the Technics SL-1200G (), which brings the famous deck back six years after it was discontinued. The new version is bang up to date, as Marc Chacksfield explains: "The SL-1200G is an intoxicating mix of the old and the new. Given this is the 50th year of the Technics brand, it is honouring the original design but has added some brilliant flourishes under the hood. It has replaced the direct-drive system with a new coreless direct-drive motor that's powered by a twin rotor, which cuts right down on any fluctuations in the rotational speed of the turntable." Start saving, because it won't be cheap.

Facebook creator Mark Zuckerberg's ongoing transformation into a supervillain has taken another step: he hasn't moved into a hollowed-out volcano just yet, but he is working on an AI like Jarvis in the Iron Man films. As David Nield reports: "The system is eventually going to handle everything from playing music to identifying friends at the front door, according to the Facebook founder. Baby monitoring and virtual reality data representations were also mentioned in Zuckerberg's post." Next up: sharks with frickin' laser beams.

Bad news for monkeys: a court ruling has said that while monkeys can certainly take smartphone selfies, they don't own the copyright. As James Rogerson explains: "The decision stems from the case of a macaque known as Naruto, who back in 2011 took some shots of himself using a camera that was left set up by British nature photographer David Slater. PETA filed a lawsuit to defend the primates copyright, with the aim of administering the proceeds from the photos to benefit Naruto and other crested macaques." Sadly for Naruto, the judge rejected the argument and the US Copyright Office now says it will only register copyright for works created by humans.

Have you seen the puddle yet? If you haven't, you're in a minority: this week, everybody on the internet was watching a livestream of a puddle in Newcastle On Tyne, UK. As Hugh Langley explained: "Many exciting things have already happened, including a small dog walking across the puddle, and a woman who spent ages trying to find a dry way around it. A couple of people waved. It's all kicking off."