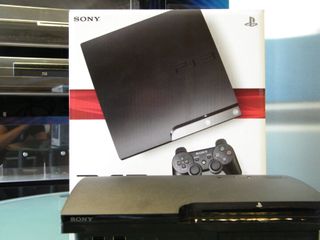 We got one! TechRadar is the first UK tech site to finally get a hands on of the new retail boxed version of Sony's latest PS3 Slim – set to arrive in UK stores next week on 1 September.

After the initial excitement and hub-bub in the office died down we managed to take a few shots of the PS3 Slim, alongside its older, slightly chubbier sibling (using a test PS3 machine courtesy of CVG.com).

Perhaps the first impression of the new PS3 machine is that it is surprisingly heavy, for its size – what with the power supply unit (PSU) and all of the cooling heatsink and fan hardware packed tightly inside, as revealed from the recent 'teardown'.

Secondly – and opinion in the office was immediately divided on this – the PS3 Slim comes in matte black, which marks it apart from the glossy older model. In our opinion this is a clear bonus, if you don't like getting fingermarks all over your console. However, a number of gamers in the office were not at all happy about the loss of the glossy case, claiming to still prefer the bigger, older games machine.

The size really is the main USP here though. And while the hardcore gamers in our office bemoaned the lack of gloss, the PS3 Slim is going to be far less intrusive in the living room, which we think is going to massively increase its appeal to casual gamers and movie fans that have yet to buy into Blu-ray.

Plus, for fans of shiny things, there is still a bit of gloss on the side panels and on the disc drive – which also features actual Power and Eject buttons that you get to feel and press this time around. Sony has finally plumped for function over fashion – small changes, but vitally important ones nonetheless.

The Slim ships with the 2.76 firmware, so you will need to update it yourself to the new 3.0 firmware when that arrives early in September. No great shakes, as getting the PS3 online via Wi-Fi couldn't be easier.

At start-up you will see the new PS3 logo (whereas previously you would see 'Sony Computer Entertainment') and then it is pretty much business as usual.

So, all in, a nice new iteration of one of our favourite bits of kit from the recent generation of gaming. Microsoft is really going to have to do a lot more than reduce the cost of the Xbox 360 Elite by £30 if it still wants to own the UK gaming market 'mindshare' this coming Christmas, as the new PS3 Slim is already solidly at the top of our 2009 list to Santa.

Roll on Uncharted 2, the new Ratchet and Clank and