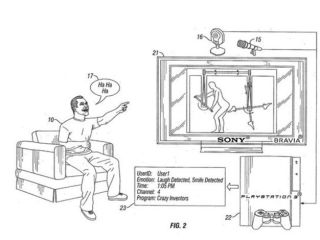 Sony patents a controller for PlayStation 3 that knows when you are happy, sad, angry or excited

A whole load of Sony PlayStation rumour and speculation is likely to finally be nailed down as true or false this week at Sony's GamesCon media conference tomorrow.

One announcement that seems very unlikely this week would be for the PlayStation 'laughing sensor' that Sony patented earlier this year.

That's right. Sony seems to have plans for PlayStation 3 to not only be controlled by touch and movement, but by your emotions – including laughter, boredom, sadness, excitement and anger.

Sony Computer Entertainment America filed the patent for a laugh detecting program which featured the bizarre illustration you can see right here.

Your PS3 knows how you feel

Siliconera reports that "the application picks up on metadata, which includes laughter recorded by the microphone and a user's expression from the camera. Both devices are linked to a "game console", shown as a PlayStation 3 in the diagram, which identifies the user, notes emotions, and transfers the data over a network."

The patent refers to various body motions that indicate excitement "such as when two individuals give each other a 'High Five'" or even boredom when a user is "looking away from the presentation, yawning, or talking over the presentation."

Sony's GamesCon 2009 conference runs from 5pm through to 8pm tomorrow, so be sure to check back on the site throughout the evening where we will be sure to keep you updated with all the major news announcements.