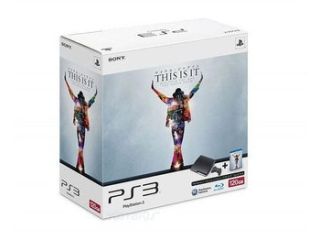 Sony is set to release a Michael Jackson PlayStation 3 bundle, offering Japanese gamers the option to buy a console with a free copy of the dead king of pop's posthumous documentary This Is It on Blu-ray.

For ¥33,500 (£226), Sony Computer Entertainment Japan is bundling the Sony Pictures Blu-ray with a 120GB Hard Disk Drive "Charcoal Black" PS3 and a wireless Dualshock 3, a power cord, one AV cable and one USB cable.

The Michael Jackson PS3 bundle will be released in Japan on January 27, the day that the disk version of This Is It documentary goes on sale.

The Blu-ray version contains some real gems for Jackson fans such as previously unseen versions of tunes from Thriller. Plus, you also get a special PS3 wallpaper.

Meanwhile, debate rages on amongst the dead king of pop's fans as to the relative merits of Thriller versus his original disco classic Off The Wall… (For the record, we plump for the latter. Every time).