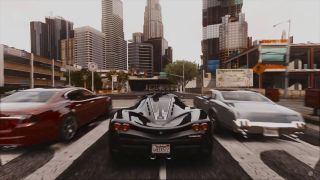 When GTA 5 finally made its way to PC last year it offered a substantial graphical upgrade over its PS4 and Xbox One counterparts.

But for one intrepid group of modders, even GTA 5's PC graphics weren't up to snuff. They've been hard at work creating GTA 5 Redux, which massively overhauls the graphics in Rockstar's seminal open-world game.

You can view the mod's launch trailer below, which shows off its improved weather systems, 4K textures, shadows, increased particle effects, light pollution, terrain tessellation and a whole host of other features that can be read about on GTA 5 Redux's official site.

In addition to the game's graphics, the mod will also offer a number of gameplay enhancements including a new police system, changes to the game's weapons and melee systems, and upgrades to its pedestrian AI.

There's no word yet on a release date (its website gives a curt "When it is complete" as an answer), but this is definitely one to watch if you've been thinking about returning to the mayhem of Los Santos.