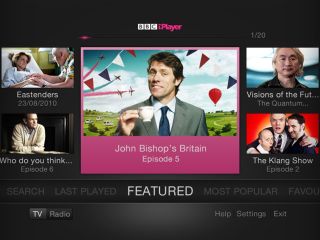 Sony's PlayStation 3 will be the first consumer device to show off the BBC's latest iPlayer, designed from the ground up to work on televisions.

The iPlayer has been a major hit on the PS3, proving a popular addition to the console in the UK.

So it's a natural place for the BBC to host its latest iPlayer version, built in HTML5 and boasting a new UI and new functionality.

That includes a "vastly improved" search function and a favourite programme feature that allows you to call up old searches and make sure you don't miss the new series of Angry Boys or QI when they roll around.

When bundled together, the views from the PS3 and the Nintendo Wii iPlayer amount to 10 million in a month – an impressive total and second only to Virgin Media's iPlayer in set top boxes.

And, having any iPlayer at all, is something that PlayStation 3 fans can use against Xbox users.

"With today's announcement, we're transforming iPlayer in its most natural home: right on the living room TV.

"By creating a product that's as simple and intuitive as flicking through TV channels, the BBC is bringing on demand television to mainstream audiences across the UK."