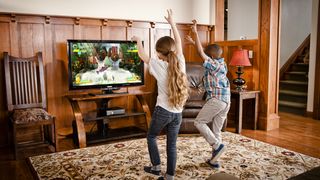 Just relaxing in front of a nature documentary

Microsoft has revealed that a team of 150 people are busy beavering away on a host of interactive video content for the next Xbox.

The fruits of this in-house video team's labour will be made available through Xbox Live, but expect to see ads alongside it as Microsoft looks to make some moolah from its hard work.

The production team is working on video that you'll be able to do more with than just watch - as Microsoft's Nancy Tellem puts it, "You can either watch linear content or really interact with it."

Tellem, who is corporate VP of the company's LA studio, explained that the Kinect puts Microsoft in "a unique position to produce content with a much higher level of interactivity".

This new focus on content jives nicely with the speculation that the Xbox 720 will require use of the Kinect rather than offering it as an add-on as the Xbox 360 does.

As well as talking interaction, Tellem revealed some Xbox stats at the D: Dive Into Media conference.

Apparently Microsoft has now shifted over 75 million Xboxes, with 46 million customers subscribing to Xbox Live and 24 million of them shouting and waving at their devices using a Kinect.

The company claims that Xbox account holders average 87 hours a month of screen time on their consoles, and that 38 per cent of Xbox users are women (although we have a feeling there may be a bit of creative number fudging going on here).

The next Xbox is still under wraps but we're expecting to see it debut in March - or before E3 2013 anyway - ready to hit all relevant Santa-based correspondence for Christmas 2013.

From TechCrunch and The Verge