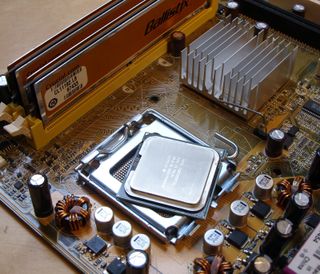 Installing a new processor isn't the simplest of tasks

This article is in association with Dabs.com

What shall we compare the computer processor to this week? How about the human brain or perhaps the heart? We could go mechanical and try the car engine?In truth, there's nothing man-made that really matches the modern processor for its complexity and adaptability.

It performs billions of operations a second, running through billions of transistors. And all are packed into a silicon-based package that's no bigger than the end of your finger.

We've gone from having just one of these processors running at a few million times a second to effectively having six and soon eight processing cores packed into a single chip computing instructions at the rate of billions of times a second.

Sounds impressive? It is. And it's also not the easiest thing to upgrade the one that's currently inside your system.

Whether you're building from scratch or upgrading an existing system, it's worth reading our guide to buying a new processorand our list of the best processors around. Now let's look at how you can replace the chip inside your system.

If you're upgrading the first step is to remove the old heatsink and processor. Disconnect the fan's power cable and then start to unlock its fixing mechanism that can take many forms. Newer Intel solutions have push-down clips, usually you need to rotate these to release them. Most AMD solutions use a fixing lever to clamp the unit in place.

Intel uses a LGA or Land Grid Array system to hold the processor, this traps the processor against an array delicate pins using a metal lid. Unhock the lever beside this to flip back the CPU and carefully remove it. The AMD system uses a ZIF or Zero Insertion Force socket that traps the CPU's delicate pins n place, again use the lever beside this to unlock the socket and carefully remove the CPU.

When installing the CPU it's vital to install it with the correct orientation, which is to say it may be square but it can only be fitted in one position. For Intel LGA processors there are two notches cut into its sides that ensure it can only be installed one way around, line these up and drop them into place. For AMD CPUs there will be a golden triangle on one corner of the processor, this is lined up with the indented triangle on the socket.

Once you're sure the processor is seated correctly you can lock the processor into place; for Intel professors this is easier to tell as they just sit on top of the pins, for AMD processors it can sometimes be a little troublesome getting all the pins to seat but it should gently drop into the socket.

8. Fingers crossed and power on

When you power on everything should continue as normal, but it's worth diving into the BIOS to double check the processor has been detected correctly by the BIOS. Potentially, if it hasn't you may need to update the BIOS, though this shouldn't stop it from working correctly.

Sponsored link: Get a free copy of Tom Clancy's H.A.W.X. 2when you buy selected GeForce GTS 450 and GeForce GTX 460 cards at Dabs.com