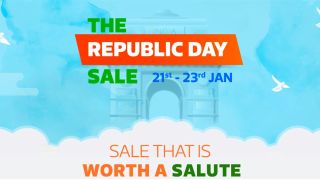 The Republic Day Sale is the latest in line of big sales from Flipkart. Continuing its tradition of offering some really good deals to its customers, Flipkart’s Republic Sale has been scheduled just before the Republic Day on 26 January.

Scheduled along with Flipkart’s sale is Amazon’s Great Indian Sale. Both the sales are being hosted by the two e-commerce giants on the occasion of India’s Republic Day.

This time though, Flipkart has lined up some big deals. The retailer will be hosting its deals starting from 21 to 23 January. There are deals across several categories, ranging from mobiles, laptops, TVs, home appliances and more.

One of the highlights of this Republic Day Sale is a celebration of home-grown brands and Made In India products. Flipkart is also offering up to 69% off on numerous products across various categories, a nudge to the fact that this is the 69th Republic Day of India.

Xiaomi's best selling smartphone in India is up for grabs at Rs 10,999. The 5.5-inch full HD display powered by a powerful processor and backed by 4GB of RAM sourcing power from a 4,100mAh battery makes for a sweet deal.

The Moto G5 Plus remains one of the better mid-range smartphones after the Mi A1, but during the Flipkart sale, the phone will be available at a discount of Rs 6,000, making its effective price Rs 9,999. Essentially, you get a mid-range smartphone at the price of an entry-level phone. Sounds like a good deal? We think so!

One of the best flagship smartphones available today, the Google Pixel 2 will be available at Rs 39,999, which is a massive Rs 21,001 off, while the Pixel 2 XL is down to Rs 48,999 from Rs 73,000. Both smartphones differ in display and design, keeping the internals same.

During Flipkart Republic Day Sale, the iPhone 7 (32GB variant) will be available at Rs 39,999 down from its usual retail price of Rs 49,000. The iPhone 7 will be a good option at this price for people looking to enter Apple’s ecosystem. The iPhone 7 comes with a 4.7-inch Retina HD display and a 12-megapixel rear camera. It is powered by the Apple A10 Fusion processor and will be available in Silver, Black, Gold, and Rose Gold options.

People on a tight budget or those looking for a secondary smartphone, this one's for you. The Moto C Plus with 2GB RAM and 16GB internal storage is powered by a huge 4,000 mAh battery. It will be available at a discount of Rs 1,000 during the sale.

Honor released the Honor 8 Pro soon after the OnePlus 5 launch at a price point which is directly comparable. From the camera quality to power, the Honor 8 Pro has all the qualities to be labeled as a good phone for Rs 25,999.

Xiaomi's flagship smartphone in India, the Mi Mix 2 is available at a flat Rs 5,000 discount during Flipkart's Republic Day Sale. The Mi Mix 2 is a gorgeous smartphone that features a 5.99-inch bezel-less display. There's minimal bezel on three sides of the Mix 2 with the front-facing camera being placed on the chin.

Acer Predator Helios 300 which was launched in India last year starting from Rs 99,990. The same will be available starting Rs 66,990 during the Republic Day Sale on Flipkart.

On the other hand, the Core i7 7th Gen variant of Predator Helios 300 with the same configuration will be available for Rs 74,990 over its current retail price of Rs 1,09,990.

Intex 11,000 mAh Power Bank has got a price drop of Rs 1,200 during the Flipkart Republic Day Sale. This powerbank is for people on the go who also consume everything on their smartphones.

Microsoft XBox One S bundles have also received a price drop during Flipkart's Republic Day Sale. Interested buyers, especially gamers should go for these bundles starting from Rs 22,990 which is a 23% drop in the original retail prices.

The bundles available with XBox One S come either with Assassin's Creed Origins, Forza Horizon 3 or Shadow of War in 500GB/1TB variants.

Apple’s flagship smartphone of the year, the iPhone X is a gorgeous device and has lured many of us with its 5.8-inch full bezel-less display. There’s just a screen on the front with a ‘notch’ which houses the True-Depth camera system used to unlock it via Face ID. It is powered by Apple’s A11 Bionic chipset and sports dual 12-megapixel rear cameras and front facing 7-megapixel snapper.