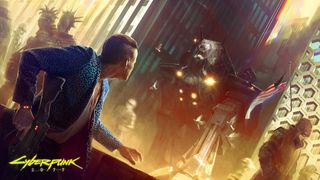 [Update: Surprising no-one, CD Projekt RED has refused to officially confirm whether or not any future Cyberpunk titles are on the cards.

Speaking to Polygon, the developer refuted claims that another AAA title was currently in development other than Cyberpunk 2077, with three teams focused on that title, one team working on the Witcher-based card game Gwent, and another team working on a "yet unannounced mobile game".

Most outlets were relying on Google Translate to get the thrust of the article, and PC Gamer has suggested there could have been an error in translation – though we ran the article by a Polish speaker who confirmed the original claims. The Bankier article also hasn't been edited or pulled down, which we'd expect if it had turned out to be hearsay.

Either way, the developer won't clarify whether or not other AAA games in the Cyberpunk universe are happening, or will be happening, using an ancient PR proverb: “We do not have more comments on the topic."

Not convinced? You can see the rest of the original story below...]

Cyberpunk 2077 is already looking to be one of the biggest video game releases of the decade. With a gigantic metropolis to explore and dynamic game systems most of us can only dream of understanding, the next franchise from The Witcher dev could be defining for the medium of games as a whole – and it looks like we're getting three of them.

Polish website Bankier.pl, which reports on the business and financial sectors, reported on comments made by the CD Projekt President, Adam Kiciński, on July 1 – suggesting there are currently three separate Cyberpunk projects in development.

The first of these is naturally Cyberpunk 2077, an AAA single-player game based the popular board game, launching in April 2020.

There's apparently a secondary team working on a multiplayer mode, though whether the mode will be included in the main offering, or purchasable separately, is yet to be confirmed.

We've already seen Bethesda make notable missteps in its standalone release of Fallout 76 – which was originally envisaged as a multiplayer mode for Fallout 4, and wasn't quite fleshed-out enough to warrant a full price tag. So we're hoping Cyberpunk Online, Hackerz, or whatever the multiplayer component is called will be rolled into the main title.

But Vice President Piotr Nielubowicz also confirmed that there was another AAA game in the works, which sounds awfully like a sequel to the mainline game: "Our next big project will also be in the 'cyberpunk' universe, and we're already working on it and treating it as a really big and innovative project for us."

Given the hype around Cyberpunk 2077, and CD Projekt RED's apparent confidence in the franchise, we're not entirely surprised – though how they're planning to go bigger and better remains to be seen.

It seems we'll get our next big reveal of the mainline game's content and systems at the start of 2020, with Kiciński saying that "A strong dose should be expected at the beginning of next year, when the preview will appear."

With an additional prequel board game on the way too, it's clear that CD Projekt RED are planning on expanding the franchise as much as they can.