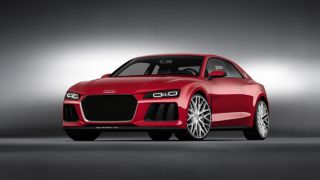 The Sport Quattro Laserlight is Audi's most advanced car

Audi spent its CES 2014 keynote the night before the first day of the convention talking about the future.

It's a future where cars drive themselves, where "smart roads" might (hypothetically) guide vehicles automatically, and where Audi cars are powered by Nvidia's powerful new Tegra K1 "super chip" and get LTE service from AT&T.

Those were two of the big announcements, but the real treat was getting to see the company's hot rod red, laser-equipped Audi Sport Quattro Laserlight concept car.

The impressive vehicle wheeled out on onto stage after a rousing dance number, and it more or less stole the show.

Being a hybrid the Audi Sport Quattro Laserlight reportedly gets 90 miles per gallon.

But more important is the Laserlight's LED/laser lamp combo headlights, which Audi said is the most advanced lighting technology of any of its vehicles. Each individual LED is managed automatically by the car's software so the headlights won't blind oncoming drivers.

The Laserlight also uses ultrasonic data to drive itself with piloted driving.

Speaking of which; Audi's piloted driving tech has apparently been consolidated down to the size of a notebook, whereas last year it reportedly took a trunk full of hardware to achieve the same thing.

To show it off, Audi had several vehicles appear on the stage without a driver in sight.

Audi executives emphasized that the company is focusing on technology now and going forward.

Audi opened its keynote with a video showing the history of the luxury car maker. Executives also drove a classic 1930s Audi onto the stage.

Executive from AT&T, Nvidia, and the Consumer Electronics Association appeared as well.

Audi CEO Rupert Stadler said the car maker is building a whole "global ecosystem of partners" like Nvidia and AT&T, including Qualcomm and Google as well. It wants to "close the gap" between cars and consumer electronics.

This obviously has to do with the recently Open Automotive Alliance, but Audi is waiting until its official CES keynote on January 7 to discuss that and its Android-powered cars further.

Audi also announced a partnership with the International Olympics Committee, whose new headquarters will be a sort of testing ground for piloted parking and other advanced Audi features, like Audi Connect.