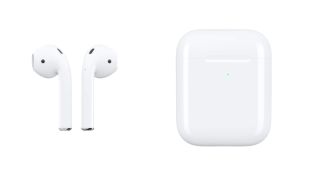 We’ve long suspected that AirPods 2 would be AirPower-compatible – in fact, we’re almost surprised it’s taking this long for it to happen. But it appears the wait for wireless charging AirPods will soon be over as a new image from the iOS 12 beta clearly shows a new case alongside a new version number for the AirPods.

The obvious change here is the addition of an external LED – a small but important change over the current iteration of the charging case which packs the LED inside the case. The likely reason for this is to give users a visual indication when the case is fully charged after it’s been laying on an AirPower charging pad.

The other change – and the one that lends credibility to the second-generation of Apple AirPods – is that the renders have a new associated model identifier, ‘1,2’, versus the current model identifier of ‘1,1’.

While there are a few other rumored features in the works for Apple’s second-gen true wireless earbuds (like phone charging, noise cancellation and waterproofing) we’ve not yet seen any visual indication that corroborate those rumors. Potentially, that means we might be waiting until the third-generation of the earbuds to get them.

If Apple isn’t ready to unveil the new earbuds quite yet, there’s always the possibility that the second-gen case will debut separately and be made available to purchase. It’s unclear whether Apple will include the AirPower case with future AirPods, but that does seem to be the most likely scenario, at least to us.

Apple has yet to announce when AirPower will be available – other than a vague release window of 2018. Until then I guess we’ll just have to keep plugging our iOS devices into the wall – for shame.