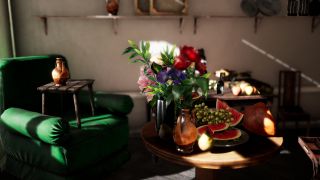 I’m trying to balance half a watermelon, rotating it this way and that, when a kindly voice transmitted through my HTC Vive headset encourages me to start painting. This is my third attempt at composing a still life using ArtVR – an art simulator that celebrates the legacy of the founders of Russia’s avant-garde movement, Natalia Goncharova and Kazimir Malevich – and I want to do it justice.

The simulator has transported me from a London office to a charming, rustic art studio full of interesting nicknacks to use in my composition. I’ve already used the Vive’s controllers to position an apple on a stack of books and place a glass bottle beside it. It’s an intuitive interface – just move a ‘hand’ over an object until it’s highlighted, hold the trigger to pick it up, and move it however you like.

It would be satisfying to keep adjusting my virtual tableau, but instead I let the melon roll away, take a brush and begin to swipe at a canvas in front of me. My scene appears, wonky fruit and all, rendered in the style of Goncharova. The lighting and brushstrokes are noticeably different to my previous two efforts courtesy of a machine learning algorithm trained using a huge sample of her work.

When the painting is ready, it breaks into fragments like stained glass and reassembles itself in a frame alongside my first two efforts. I move my head to select one, then send it to Instagram with a pull of a trigger.

A world of possibilities

Unsurprisingly, Goncharova’s actual work, on display at the Tretyakov Gallery in Moscow, is far more impressive. After attempting my own still life, I have a much better appreciation of her skill.

“The purpose was not to entertain,” says Dima Neiaglov, EU regional manager of VRTech Group – the company behind ArtVR. “The purpose of the whole project is a bit akin to an audio guide. It’s not about showing the life of the artist – it’s getting you in the right mood before or after seeing the paintings.

“People often find still life quite boring. Afterwards you go to the gallery and you look at what she did differently, and that’s what constitutes beauty in still life. It helps you to enjoy art more.”

VRTech Group is a Dutch-based company that creates VR experiences from its heaquearters in Amsterdam. It built ArtVR in collaboration with the Tretyakov Gallery in Moscow, where four visitors at a time can experience art in a new way.

The stylistic engine, which turns a composition into a picture, is Neiaglov’s favorite part of the simulator. “It’s very unique,” he says. “It’s not like Instagram – it really has a mind of its own. We’ve used it dozens and dozens of times, and it still surprises us. It’s like the question: ‘can a robot create a symphony?’ It just amazes me that a computer can work with brush strokes, perspective, light, color. This opens a whole different world of possibilities for artificial intelligence in art.”

The ArtVR experience is running in July to coincide with the FIFA World Cup, when millions of people are visiting Russia from all over the world. World Cup ticket holders get free entry to the gallery, where they can discover artists whose work they might otherwise never see. However, its origins go back much further.

“At some point a long time ago, I was approached by a group who wanted to bring Russian culture outside of Russia,” says Neiaglov. “We pitched a lot of idea and it ended up with a project where Stephen Fry did an audiobook of a Russian book [Eugene Onegin by Alexander Pushkin] in English. I also had an idea of celebrities giving their opinions on Russian art.

“Much later, I came back to the research on avant-garde artwork and looked at all the places in the world where it’s presented well. Artists like Van Gogh are presented very well, but others are less so. That was the reason behind choosing these artworks.”

Neiaglov hopes to bring the experience to mainland Europe, and possibly the UK next year. He'd also like to experiment with different forms of art. “I think the Russian avant-gardes of the 20th century are a good match style-wise," he says, "but I’d really like to do Greek sculpture in future.”

ArtVR uses the Unreal Engine (as used by Fornite, Sea of Thieves and dozens of others), which explains the gorgeous lighting and realistic physics. I later discover that I could have taken a bite from one of the apples, or thrown the melon across the room – a fact that comes into play in the second simulator, based on the strong geometric style of Kazimir Malevich.

I find myself in a new, darker studio, where a more urgent voice – a voice actor imitating Malevich himself – tells me to pick up an object and throw it at the easel. After confirming with Neiaglov that it’s OK, I grab a shoe from the floor and hurl it towards the white canvas, where it leaves a stark, primary-colored rectangle.

The voice explains that this represents Malevich’s radical way of creating an emotional response without depicting actual objects. I throw some more items into the painting, producing more shapes, and adjust their size and color. Then, instructed by the guide, I step through the canvas to see my work in three dimensions – bright blocks in empty space.

“[Malevich] is one of my favorite artists,” Neiaglov says, “but people are bored looking at his work. Everyone has an iPod, but you don’t know it was copied from an original Braun design, and you can trace it back to ich.”

“When people see good art, they don’t have a piece of bad art to compare it with,” he says. “You go to a museum and think ‘I could do that’, but most patterns of shapes are not good. Malevich shows that human being can express themselves through shapes and colors. They don’t need objects. You get to be emotional towards rectangles.”

The simulation isn’t perfect yet – when I drop my brush, I bend to pick it up, only to find it already floating back to its starting position on the table – but Neiaglov and his team are constantly adjusting the improving the software based on people’s interactions. The animation of the painting breaking into flying, butterfly-like fragments is a recent addition.

“The interface design was the biggest challenge. VR is still quite young, so there are no standards or expectations. There was a lot of experimentation. Doing things that people can experience without help was a real challenge. That was one of my challenges, and we did a lot of tests and threw away a lot of ideas.”

ArtVR has been a huge success in the gallery, where its carefully crafted interface means four people at a time use it with only the bare minimum of assistance from museum staff. The experience is currently running at full capacity for eight hours every day, and VRTech is considering keeping it open for longer to accommodate more visitors.

“We also see a very even age distribution,” Neiaglov says. “Typically for a VR project, your average age is 23-30. Here, we see a lot of people over 60 and children. Sometimes kids try it and immediately call their parents over. That doesn’t happen with games. It’s a very family thing to do; parents don’t believe it’s a kids’ thing. It’s on everyone’s intellectual level.”

He’s surprised that some people seem to find the experience addictive. “We see more people coming back than we expected,” he says. “Maybe it’s the social thing, because it’s posted to Instagram.”

I suspect it might have more to do with perfectionism – wanting to get the position of each object just right before committing it to virtual canvas. Part of me still wonders how much better my last picture might have looked if I’d taken a little extra time to adjust that watermelon.