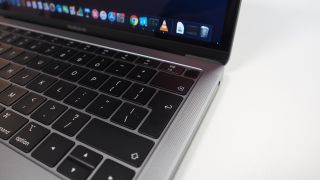 Apple has a new, MacBook Pro 16-inch expected to launch later this year, and a new report from Apple analyst Ming-Chi Kuo suggests it may be the first model to switch away from the Butterfly switch keyboards found in all MacBooks for the past few years, 9to5Mac reports.

The Butterfly keyboards used in MacBook, MacBook Air and MacBook Pro models have been plagued with issues since they first showed up. While the Butterfly key switch mechanism allowed Apple to make extra thin keyboards, they have suffered issues with debris getting underneath them, sticking keys, and missed and repeat key presses.

Previously, Kuo had suggested that the new keyboards, which will use a common scissor switch mechanism, would come in 2020 MacBooks. And, while Kuo still somewhat stands behind that, the anticipated MacBook Pro accelerates the timeline somewhat.

His report still suggests that MacBooks released in 2020 will dump the Butterfly keyboard in favor of the new design using scissor switches.

All that is really changing to the timeline is that the rumored 16-inch MacBook Pro will come out sooner than the other models – October 2019, apparently – with the new scissor switch keyboard.

This is a plus for anyone who saw the previous report but had their hopes up for the larger MacBook Pro. There's little doubt that the new, larger form factor for the MacBook Pro will let it pack in more expensive hardware, and that screen isn't likely to come any cheaper either. So, getting a dependable keyboard that doesn't have a multi-year history of issues may be a nice perk for customers later this year.

Of course, this all assumes that the rumors of a 16-inch MacBook Pro are even true.