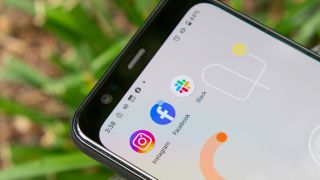 Google Pixel owners have noticed something strange happening recently: app icons are disappearing from their homescreens for no apparent reason.

The problem is caused by a bug in Google's December security update, which involves the Pixel Launcher. The apps themselves are unaffected, and can still be launched as usual if you can work out where to tap, but it's proving to be a real annoyance.

As 9to5Google explains, the app names are still visible in the Pixel Launcher, so you should be able to see where the icon would normally be. Unfortunately, the Favorites bar doesn't show app names to save space, and may be unusable until Google releases a fix.

There doesn't seem to be any particular pattern to the app icons disappearing. Some Google Pixel 4 and Google Pixel 3a users are experiencing the problem despite restarting their phones multiple times, while others are seemingly unaffected.

This inconsistency might be because not all Pixel phones actually received the latest update in full. Many owners complained to Google after failing to receive various new features that were supposed to arrive with the security patch (including automatic filtering of robo-calls and background blurring for Google Duo video calls).

Google has confirmed that it will release a joint December/January update for devices that missed out – hopefully without the icon-erasing bug. We'll keep you updated once we know more.