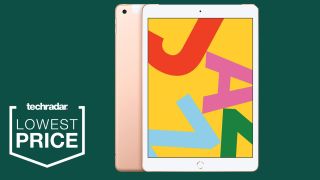 Okay, maybe iPad 10.2 deals weren't on your mind before Cyber Monday or maybe you were focusing on gifts for others over the deals weekend, and they didn't include Apple's new tablet.

If so, you're in luck: the best iPad deal we've seen is still live for the Cyber Monday deals, saving up to $100 off the new iPad. (Not in the US? Scroll down for today's best iPad deals in your region.)

The new iPad 10.2 is slightly larger than the standard 9.7-inch size that defined the standard iPad line for years. That shift - and the triple-pin connectors on the side - make it compatible with the pin-connecting keyboards previously suitable only for the iPad Pro and iPad Air.

You're getting an A10 Fusion chip, Touch ID and up to ten hours of battery life, so nothing too fancy but more than enough to keep you up to date with the latest software, ensure your iPad is secure, and have your tablet running all day.

If you're looking for a cheap iPad to keep the kids entertained or to stream your favorite shows and movies, this the model for you. 32GB won't get you too far in the way of large apps and downloads, but it will certainly support the light use this price tag is targeting.

Both storage size variants are discounted though, but obviously the 128GB iPad 10.2 is still set to cost you more.

Apple 10.2-inch iPad, 32GB: $229.99 at Target
This is the absolute lowest price we've ever seen on a 2019 iPad, with the 32GB model coming in just under $230 this Black Friday weekend. Note that stock is limited to collection only, so if you can't find it nearby it's worth looking at the deal below.View Deal

Apple 10.2-inch iPad, 32GB: $249 at Walmart
The all-new Apple iPad gets an $80 price cut from Walmart that may be suitable if you can't get the Target deal above. It's not the lowest price we've seen for the 10.2-inch tablet, but it's still an impressive cut for a tablet that features 32GB of storage.
View Deal

Apple 10.2-inch iPad, 128GB: $329.99 at Best Buy
Want more storage than the deal above? You can get the 128GB version of the tablet for less now as well with a $100 discount available at Best Buy right now. You can also get this one in Space Grey, Silver or Gold.View Deal

If you aren't shopping in the US, here are today's best new iPad deals in your region: