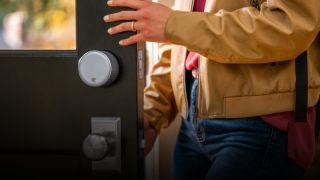 CES 2020 draws to a close, in what may be the biggest show for the smart home in memory.

Hundreds of smart home companies, big and small, descended on Vegas to show off their latest devices. There were some themes to pick out – privacy and security came up a lot – but otherwise it was your typical CES, ranging from the brilliant to the bonkers.

But which devices, gadgets, and technologies really stood out from the crowd? We've combed through everything on the show floor to bring you the best of the bunch: here’s our pick of the best smart home devices from CES 2020.

We’ll admit we thought the Moxie was a bit of a gimmick when we first heard of it, but having now checked it out for ourselves, we’re more convinced. The Moxie puts Alexa into your showerhead so you can drown out your own incessant humming with actual music.

There are actually two parts here: the circular showerhead, and the Alexa speaker that slots into it. That speaker needs to be separate so you can charge it up, and it comes with a dock so you can do so.

The Philips Hue smart bulbs line had a mammoth 2019, but somehow it still has more to give. Parent company Signify came to Vegas to show off a new outdoor lighting range, including the wall-mounted Appear light, the new Econic pedestal light (pictured above), and a new spotlight named the Lily XL.

All of them support Hue’s full range of 16 million colors, as well as packing both Zigbee and Bluetooth support. We’re choosing the Econic pedestal light as our favorite of the bunch: it will cost $129.99 (around £100 / AU$190) when it goes on sale in March in the US.

Sadly it won’t be available in Europe, but that market will get Nyro, a downward-firing outdoor light with a rectangular fixture.

The big daddy of smart locks came to Vegas to show us its latest and greatest bit of home security. The fourth-generation Wi-Fi Smart Lock is 45% smaller than the last and no longer requires the August Connect bridge, thanks to carrying a built-in Wi-Fi connector.

It’s the second point that’s most important here, as it makes setup much more straightford: just pair it with the app and away you go. You’ll have all the same functionality, including remote access, Doorsense tech, and compatibility with Alexa and Google Assistant. No word on price or release date just yet, though.

We’ve seen the light – and it’s firing out of Arlo’s latest outdoor smart camera. Arlo Pro 3 Floodlight Camera is, quite simply, the Arlo Pro 3 with a massive floodlight slapped on the front.

If you’re not familiar with the Pro 3, it’s an outstanding security camera – but despite having a light of its own, it’s positively feeble to the 3,000 lumens the Floodlight model can blast. We even got a quick demo of it in action at CES, and it’s bright enough to get a good clear look at whoever’s creeping around your porch. It also means you can get a color recording even at night: something basic night vision doesn’t usually include.

You can choose when the light comes on, or how bright it is – and even set up triggers so that it flashes or pulses when it detects movement. Beyond the lighting tricks, you’ve got a 160-degree field of view, two-way audio, and six months of battery life. It’s on sale this spring for $249.99 (around £190 / AU$360).

There’s always a handful of companies at CES putting a spotlight on privacy and security, and Igloohome was one of the more interesting examples this year. Its smart locks don’t connect to the Wi-Fi at all and instead use something called “algoPIN technology” which functions a little like bank token passwords.

The user is given a time-sensitive pin code by the Igloohome app, which will then work with the lock due to some algorithmic magic. You don’t need your phone to be near the lock to work, and the system means you can give guests the one-time passcode to grant them entry.

The Wemo Mini is one of our favorite smart plugs, due to its versatility and tiny dimensions. At CES 2020, Wemo announced an even smaller version of its plug. Why do we care so much? Because there’s nothing more annoying than a smart plug that blocks off other outlets, and sadly that happens all too often.

The Wemo Mini also has HomeKit, Google Assistant and Alexa support, or you can use the Wemo app to connect with the company’s other smart products. The new Wemo Stage, a detachable smart remote, were also unveiled at the show.

Lifx had a slew of new products at CES including some lovely new filament bulbs, but more interesting is its four-gang light switch. The Lifx Switch can be used to control both smart and dumb lights in your home, giving you full control from the Lifx companion app.

The downside is that you can’t dim lights with it – and you’ll need to use a separate smart speaker or your phone to do so through a voice assistant. The switch costs $119.99 (around £90 / AU$175) and will be shipping in the spring, with a single-switch version set to follow some time after.

Abode’s dinky new smart camera won over our hearts at CES 2020. Although it’s small, this thing packs in a hell of a lot of features, and can function as a camera or be hardwired for use a doorbell camera.

Although there’s no button on it, Abode has packed in facial-recognition smarts, which would still make this handy as a doorbell option. There’s 1080p video with a 152-degree field of view, while the cam supports Abode’s Cue automation tech, which allows you to set up single automations based on multiple different triggers. The cam will launch in Q2 for $199 (around £150 / AU$290).

Royole came to Vegas to flex, in more ways than one. Its new Alexa smart speaker – the Royole Mirage – has a 7.8-inch AMOLED screen wrapped around its body and looks, quite frankly, ridiculous.

Seeing it up close, though, we couldn’t help but be a little impressed. This is far more than a concept, too: Royole says the Mirage will be available to buy in the first half of this year for – get ready for it – a whopping $899 (around £690 / AU$1,300).

More bonkers still, the company insisted that the display is much the same as the ones found on Echo Show devices. We’re less sure about that one, as we haven’t seen any third-party manufacturers using the Echo Show interface – but hey, maybe Amazon has allowed it.

Nanoleaf does smart lights, but not the kind you’ll see from Philips Hue. Nanoleaf has made its name with modular lighting that fixes to the wall – Nanoleaf Canvas, Nanoleaf Light Panels –  and in Vegas it showed off the next iteration, with a hexagonal design that you’ll also be able to fit together to make interesting patterns.

Best of all, Nanoleaf says this is part of a new Unified series that will all work together, suggesting we’ll see other shapes in the future that will be able to slot in with the hexagonal lights (until now, only lights of the same shape have worked together).

More interesting, however, was a new line of lighting that Nanoleaf teased, called the Learning Series. Nanoleaf says this range “learns, senses and reacts” to the user and their environment – for example, they may automatically switch on when you enter a room, or adapt to the outside weather.