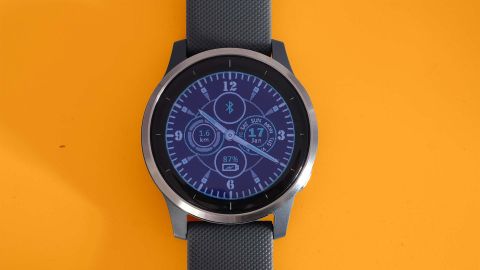 The Garmin Vivoactive 4 puts the tech smarts of the watches used by the ultra-marathon-running elite into a more accessible wearable. You may not get all the pro-style advice of a Forerunner, but you do get the rest.

Vivoactive is Garmin’s range of touchscreen fitness watches. Back in the Vivoactive 3 days, this was a great slimmer, smaller alternative to the Forerunner and Fenix watches.

But Garmin has made its watches made for real running nerds a lot more accessible in recent years. The Forerunner 645 Music is small and good-looking, the Fenix 6S is not a wrist-dominator like the bigger Fenix models.

So where does that leave the Vivoactive 4? The Vivoactive 4 is still significantly cheaper than most Fenix and Forerunner alternatives, and smart changes to the controls mean you are much less likely to accidentally pause and stop exercise tracking with touchscreen swipes and prods.

It’s a great fitness tracker, as long as you are happy to miss out on some of the month-to-month monitoring stats offered by the Fenix and Forerunner watches.

The Garmin Vivoactive 4 was announced in September 2019 at the IFA conference and it is a follow-up to 2017’s Vivoactive 3.

This is a good route to Garmin-grade tracking without blowing a huge hole in your finances. However, in early 2020 at least, you may want to consider the older Vivoactive 3 too. It has older hardware, which has real effects but at $171 (£159, $236.97AU) is currently a bargain.

The Vivoactive 4 looks fairly similar to the Vivoactive 3 and Foreunner 645. A band of silver, but not chrome-bright, metal sits around the edge of the watch. Its screen is protected by Gorilla Glass 3 tech, but it's not recessed like the Fenix 6’s, making it slightly more vulnerable. Every bit of such protection adds to a watch’s dimensions, though.

We switched to the Vivoactive 4 from using the Forerunner 645 Music. It’s the watch we use to track runs week-to-week.

The Vivoactive 4 is larger, and it's significantly so. But just buy a Vivoactive 4S if a slim watch is what you want as it has similar features with a slightly smaller screen and battery.

This is a comfortable watch to wear, but again the Forerunner 645 wins out slightly here. The Vivoactive 4’s standard silicone band is thicker and has less “give” than the Forerunner’s. The lighter and smaller a watch is, the less likely you are to notice it is even there on your wrist after a few hours.

We find we tend to take the Vivoactive 4 off for a few hours each day. You only end up with angry-looking indentations on your wrist if you do the strap up extra-tight.

There’s no need to take it off, apart from to charge, if you are happy to wear it all day. The Vivoactive 4 has 5ATM water resistance, sufficient not just for showering but swimming too.

This display won’t look too impressive to those who haven’t owned a Garmin or similar watch before. These are transflective screens, meaning they reflect light so they become clearer on a bright day.

This is the polar opposite of the LCD and OLED screens used in a lot of other smartwatches. They have to increase brightness to compete with sunlight, rather than being “powered” by it.

The Vivoactive 4 also emits light, so you can see the display in a dark room. But this light only comes on when you interact with the watch or give it a wrist flick towards your face. This screen uses very little power when non-lit, and displays content 24/7, until the battery dies.

This is still the best kind of screen for outdoor run training. You don’t have to worry
about flicking your wrist so you can see your pace mid-run. It’s just there, on-screen, the whole time. And there’s no battery tax involved.

This is likely a response to complaints it is far too easy to accidentally pause or end a workout with the Vivoactive 3.

During exercise, the Vivoactive 4’s screen is used to flick through information screens. But to pause and stop tracking, you use the buttons. The result? We’ve had zero of the issues many Vivoactive 3 owners have experienced.

You might assume the Vivoactive 4 feels more like a smartwatch than the very exercise-focused Forerunners and Fenix products. The interface is much the same here, though.

You flick up and down from the watch face to access both extra info screens and apps. The Vivoactive 4, just like other Garmins, uses the Connect IQ app store to add software to the watch. A few years ago we half-thought this app store might get more of the kind of apps you see on Wear OS or an Apple Watch. But this interface shows that is not aim.

For example, if you install Flappy Bird, a poor-quality clone of a mobile game that blew up in 2013, it starts running automatically when you flick to its “info” page, above the clock face. We may not have cancelled a run tracking session by mistake with the Vivoactive 4, but we have accidentally loaded Flappy Bird a dozen times or more.

Steer clear of apps like this and you’ll be fine.