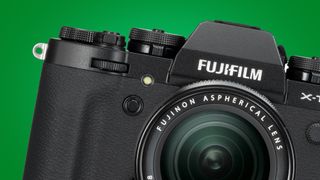 Rumors and leaks are starting to fill in the jigsaw puzzle that is the Fujifilm X-T4, the company's incoming new flagship APS-C camera – and the latest one suggests it'll have a new screen that might not be universally loved.

Fuji Rumors, which has so far proved to be a pretty reliable source of pre-launch info, says a source has confirmed that the Fujifilm X-T4 will have a fully articulating, flip screen in the style of the Panasonic S1H.

This means that, unlike the Fujifilm X-T3's more limited tilt display, its screen should be able to flip out to the side and rotate. This is particularly handy if you need the screen to face you while recording video to camera, without blocking the hotshoe or tripod mount.

So why could it prove controversial? Some stills shooters prefer tilt screens to fully articulating displays, because the latter often need to be pulled out to the side before you can tilt them. If you only want to shoot stills from low or high angles, then articulated displays can sometimes add an extra element of complexity and vulnerability.

Naturally, they also bring advantages. Along with their greater versatility, fully-articulated screens also usually fold back inwards to face the camera, which helps keep them protected when stored in your bag. We also don't know exactly what type of flip screen Fujifilm will introduce on its new APS-C flagship.

If the rumors are true, a fully articulating screen would really just reflect the Fujifilm X-T4's greater focus on video compared to its predecessor.

The inclusion of in-body image stabilization (IBIS) and the ability to shoot 6K/60p video, which are also tipped to be included, would further boost its video credentials and suggest that it's actually more of a spiritual successor to the Fujifilm X-H1, rather than the X-T3.

The inclusion of IBIS, in particular, would mean an increase in body size (the X-T4 is rumored to be a third of an inch thicker than its predecessor), so it may be that Fujifilm felt this would also be a good time to introduce the more space-hungry articulated display.

With the X-T4 rumored to be announced on February 26, we probably don't have long to wait for the official confirmation – in the meantime, check out our in-depth Fujifilm X-T4: everything we know so far rumors roundup for our analysis of the rest of the camera's possible features.