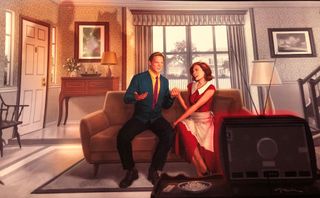 With The Mandalorian season 2's release date confirmed for fall 2020, the Disney Plus line-up for 2020 is starting to take shape. Now, Disney has revealed that MCU spin-off WandaVision is releasing in 2020, having previously been earmarked for an early 2021 release.

This was confirmed in a Disney Plus trailer that teases the streaming service's 2020 line-up. You don't get any footage of WandaVision, or the other MCU show we knew was coming this year, The Falcon and the Winter Soldier, but you do get to see what Bucky and Sam's new superhero costumes look like. Check it out:

Is this not what 2020 vision means? From #ToyStory 4 and Aladdin to #LizzieMcGuire and WandaVision, here’s a look into our future at the blockbusters and Originals coming to #DisneyPlus this year. pic.twitter.com/QHGMHat89nJanuary 1, 2020

The previously announced release window had The Falcon and the Winter Soldier down for late 2020 and WandaVision for early 2021. Disney hasn't articulated exactly how the schedule will change, but it's likely we'll see WandaVision right near the end of 2020, if we assume the Captain America-themed series is still coming first.

WandaVision will have deep connections with the upcoming Doctor Strange and the Multiverse of Madness movie (along with the separate Loki series). Elizabeth Olsen will reprise her role as Wanda Maximoff in that movie.

WandaVision will have something of a 50s sitcom style, at least visually inspired by The Vision comic from a few years ago, where Vision tries to start a life in the suburbs with his family of androids. It'll still feature the huge-scale Marvel action we're used to, though. These series are rumored to have budgets of up to $25 million (£18.9 million / AU$35.7 million) per episode too.

We'd guess the show will be focusing on how Wanda is dealing with her grief towards Vision's death at the end of Avengers: Infinity War. In the comics, Wanda has reality-altering powers that the MCU films haven't really explored yet, and it's possible this sitcom setting will be a manifestation of that. No doubt we'll see more of WandaVision as we get deeper into the year, with its next showing likely to be at San Diego Comic Con in July.

The line-up of MCU shows coming to Disney Plus is pretty exciting, if you can't get enough of this universe. Alongside WandaVision and The Falcon and the Winter Soldier, you've also got animated series Marvel's What If? (mid-2021), which features the voices of MCU cast members, as well as Loki (early 2021) and Hawkeye (late 2021). Further off, you can expect live-action shows based on Ms Marvel, Moon Knight and She-Hulk.