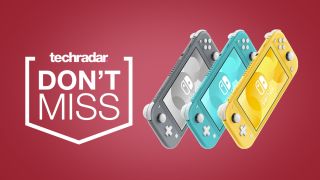 The cheap Nintendo Switch Lite is a handheld-only version of the triumphant Nintendo Switch. Though you can't remove the Joy-Cons or dock the console to the TV, the Switch Lite offers an amazingly cheap way to play all of Nintendo's latest titles whenever you want to.

And those are some pretty stunning titles. We're already playing The Legend of Zelda: Breath of the Wild, Mario Kart 8, Luigi's Mansion 3, and Super Smash Bros. Ultimate on the system but 2020 is looking amazing as well, with Animal Crossing: New Horizons and Breath of the Wild 2 hitting systems. That's just Nintendo's own first-party titles, as well. There are swathes of excellent new releases hitting Nintendo's handheld system in the new year, making these Switch Lite deals all the more enticing.

Still looking for more Nintendo Switch Lite deals? We're tracking all the best Switch sales and have you covered on the standard console as well as the Lite. You can also find more Currys Christmas sales on our roundup.