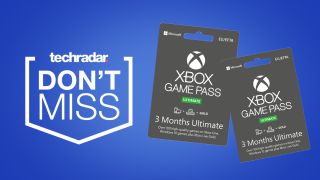 We're nearly there. January payday is just around the corner and we can all start buying games once more. But what if we went further and sorted the next six months of gaming for just £32.99? This Xbox Game Pass Ultimate subscription promises to do just that, and also brings you plenty of discounts and covers your online play as well.

That's a massive library of classic Xbox titles that go as far back as the original Xbox days and as recent as blockbuster games hitting the service on day one. Not only that, but you're also saving on your online play, with Xbox Live Gold included in the Game Pass Ultimate subscription.

Game Pass deals are a great way to pick up Xbox's usually pricier memberships on the cheap, and this Xbox Game Pass Ultimate subscription brings that cost way down. Not only that, but you won't need to think about getting your wallet out for more for at least six months.

Not in the UK? Scroll down for the best Xbox Game Pass Ultimate subscription deals in your area.

Just after some online play? Check out all the latest Xbox Live Gold deals right here. We've also got you covered for straight Game Pass sales if you're looking to save even more cash. While you're kitting out your Xbox for the next few months, you might also want to refresh your hardware - you may find some inspiration in all the latest Xbox controller deals we've found across the web.