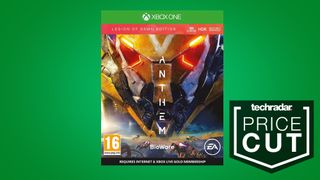 BioWare's Anthem has had a rocky few months since its release in February this year, leading to poor sales and disappointed players.

With arguments that its endgame content is weak, its loot system broken and its story not up to scratch when compared with previous narrative-driven BioWare RPGs, the developer has been fighting to win back the hearts of those who were initially in awe of Anthem's promise.

Until now, nothing has really stuck. But it looks like there's a major overhaul on the way which could convert Anthem from a zero to a hero - and turning Amazon's Black Friday offer on the title from a bargain bin dive to a great gaming investment.

Why it's an investment

Now, we hear what you're saying. Why on earth would you want to buy a game which is explicitly bad? Even if it's on offer.

Well, for a start, Amazon is offering Anthem's Legion of Dawn edition for just £11.99 This edition includes the base game alongside the Legion of Dawn ranger, colossus, storm, and interceptor armor packs, a legendary weapon, and the ranger javelin exosuit legendary gear attachment. Pretty decent for just over a tenner.

Check the deal out below:

Anthem Legion of Dawn Edition: Xbox One | Physical Edition | £11.99 at Amazon
This edition of Anthem includes the base game with some extras. You get the Legion of Dawn ranger, colossus, storm, and interceptor armor packs alongside a legendary weapon and the ranger javelin exosuit legendary gear attachment - just £11.99.View Deal

But that's not why we're recommending it. Anthem seems to be following the same treacherous path that Hello Games' action-adventure No Man's Sky did. On release, No Man's Sky was a flop and prices plummeted. However, several years down the line, the game got an overhaul that essentially brought it back from the dead - with players clamoring to pick it up once more. Of course, by that point, the prices increased again.

Those who already had No Man's Sky didn't have to worry about that issue. And that's the key.

Anthem may not be a good game right now but an overhaul could (fingers crossed) make it the great game BioWare promised it would be. It's more of an investment than anything right now. Plus, to grab a AAA title with some extras thrown in for just over £10 isn't to be scoffed at.