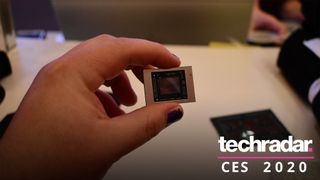 Yeah, we know, this is the most basic shot of a processor ever (Image credit: Future)

At CES 2020, AMD spent a lot of time talking about how it had a big 2019, and it definitely has the right to gloat. AMD Ryzen 3rd Generation processors have essentially made Intel irrelevant, especially since Team Blue showed up at CES 2020 with no desktop silicon to its name. No matter how exciting AMD's takeover of the desktop space is, though, it has one giant roadblock before it can totally annihilate Intel in the consumer world: laptops.

Now, AMD's presence in the best laptops is definitely growing and Team Red hopes to keep that momentum going into 2020. The company claims that it has 100 new laptop designs that will be coming to market in 2020, but we don't know how many of those will be worth writing home about. But either way, AMD's laptop game is about to expand in a big way.

In the desktop world, raw performance is king. The people who build their own PCs care about raw horsepower above anything else, which is why AMD has been able to topple Intel's reign. However, laptops are a bit different.

Performance is still definitely an important factor in the best laptops, but for most people what matters is efficiency. With Ice Lake, Intel has made great progress in reducing power consumption and increasing battery life through the use of AI. A big part of Intel's Project Athena, of which Ice Lake is a part, is the ability for your PC to learn how you use it over time, so it can prioritize performance when you personally need it, and saving power when you don't.

This is definitely a hard thing to actually test, but it is a feature that is there. Intel has also worked in specific optimizations to quickly wake up your computer from sleep and can even enable unique features through its software integrations in programs like Photoshop.

So, while performance hasn't increased in a way that a normal person would notice (Ice Lake is definitely faster than, say, Whiskey Lake), there are still new features being added that offer a lot of value for everyone who uses its laptops. It just happens to be way more subtle and not terribly exciting.

AMD will likely win in speed

It's important to note that AMD Ryzen 4000 mobile processors aren't available for testing yet, so we don't know what real-world performance is going to look like. All we can do is take a look at the specs and spec-ulate about how fast they might be.

And, while we haven't had a chance to even touch a laptop with a Ryzen 4000 processor in it at CES 2020 (they were annoyingly behind a glass panel), we can just assume that AMD is going to absolutely thrash Intel Ice Lake in raw horsepower.

Intel Tiger Lake is likely to follow in Ryzen 4000's footsteps and may even exceed it, but that's what happened with Ryzen 2nd Generation back in 2018, and we all know how that turned out.

The way it might end up working out, at least in the short term, is that anyone looking for raw horsepower in their laptop is going to go with AMD, but there are too many quality-of-life features in Project Athena to write Intel off. Laptops are Intel's home turf and main money maker – don't expect Intel to lay down and take it in the same way it did with desktop.

The future is still in the future

If AMD really wants to claim the laptop space in the same way, we don't think raw performance is going to be enough. Now, we did get a chance to talk to AMD about these new processors, and we were told that AMD is working with hardware vendors to make sure some of the quality-of-life improvements Intel users are used to are included.

However, we're going to have to see what kind of software enhancements and, we hate to say it, AI integration AMD can work into its processors. From what we were being told at CES 2020, however, it seems like AMD's current goal is to show laptop manufacturers that it can consistently innovate and continue producing fast-performing processors.

After all, in the laptop space a good processor is meaningless if it doesn't have the hardware partners to back it up. But since there are apparently 100 new AMD-powered laptops coming to market this year, it looks like that strategy is starting to pay off.

One thing that might help Team Red claim mainstream affection, which will lead to more AMD laptops, is its new Athlon processors. We can geek out about all the flagships out there, but at the end of the day there are a ton of people that only have a few hundred dollars to toss at a laptop.

AMD did announce two Athlon processors at CES 2020 that are built for those laptops, and it claims that they can provide a much better experience. AMD is also working with laptop manufacturers to bring features like Windows Hello to the bottom end of the laptop market, and we're huge fans of that idea.

The future is bright

Right now, especially if you want the best laptop or Ultrabook out there, you're getting an Intel processor. Laptops like the Dell XPS 13, HP Spectre x360 and MacBook Pro are all rocking Intel silicon, with no trace of AMD.

However, AMD is getting closer to this segment of the market every day with its mobile processors. Lenovo announced the Yoga 7 Slim, which isn't quite the top-end device in its wheelhouse, but it's definitely up there. And, of course, we can't forget the Microsoft Surface Laptop 3, even if it ended up not being the greatest laptop out there.

The way we look at it, if we can get to the point where users will be able to get the XPS 13 and choose between AMD and Intel we'll be extremely happy. Competition is coming to the high-end laptop space, and it's about damn time.