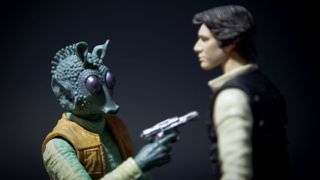 The original Star Wars trilogy has arrived on Disney Plus,  freshly remastered in a 4K resolution format, and somehow the infamously edited Han/Greedo scene has been mangled yet again.

Luckily, the result is more hilarious than offensive. Remember your life before this next clip, because a new, made-up word will enter your vocabulary that you'll never be able to unhear.

Yeah, Greedo says "Maclunkey!" now, shortly before his demise. As the Star Wars Visual Comparisons thread notes above, a new explosion has also been added after the shootout occurs, covering the shot of Greedo slamming into the table. Han and Greedo also now shoot each other at the same time, with the previous 1997 edit controversially making Greedo shoot first.

According to an article by Vanity Fair, "Maclunkey" is actually the work of George Lucas, with this change made before Lucasfilm was sold to Disney back in 2012. No one seems to know why this edit has been made. But does it matter? We live in a world with 'Maclunkey' now. A better world.

Maclunkey belongs to the internet now

Credit to comedian Eric Fell, the first to seize the comedic opportunity of this moment.

"Maclunkey!" cannot be put back in the box now. It has a hashtag, and Stephen King has even tweeted about it, guaranteeing that this word is now officially property of the internet.