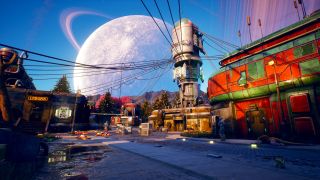 Developer Obsidian Entertainment has had a great deal of success with its sci-fi RPG The Outer Worlds since its release in October 2019, garnering reviews filled with praise for its colorful and personality-filled world as well as several nominations at the 2019 Game Awards.

It’s unsurprising, then, that Obsidian has confirmed plans to extend that success into 2020 with some DLC.

The news was announced on the official Obsidian boards where social media manager Shyla wrote a message of thanks to “the incredible team behind The Outer Worlds” before going on to thank all of the players who voted for the game in The Game Awards.

“To all of those who voted for us in The Game Awards, you are all fantastic and we are so grateful for your support. The reception to The Outer Worlds has been unbelievable to see, and even just being nominated means a lot. However, the journey isn’t over yet as we are excited to announce that we will be expanding the story through DLC next year! Details will be made available at a later date.”

As yet, there’s little in the way of details around the DLC other than that it’ll involve “expanding the story”. Given the game was a Best Narrative nominee that's likely to be something to look forward to.

All we know for sure, however, is that details will be coming at a later date and the DLC itself is planned for some time next year. 2020 is likely to be another big year for the game as the Nintendo Switch version of the game is expected to launch early in the year.