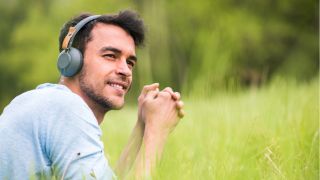 For all their smarts and specs, even the best headphones of 2020 can't protect your lungs from air pollution – but that's something Dyson could be seeking to change, judging from the brand's latest patent.

As reported by Bloomberg, the company has patented a pair of over-ear headphones that double up as an air purifier, housing a filter inside the earcups and a mouthpiece that guides filtered air directly in front of the user's mouth and nose.

The patent, which dates back to July 2018, has only just been made publicly available, and describes Dyson's inventive solution to air pollution – something the brand says is "an increasing problem" and that "a variety of air pollutants have known or suspected harmful effects on human health".

According to the patent, both of the headphones' earcups contain a motor that's connected to a 35-40mm propeller. This propeller spins at roughly 12,000 rpm, to draw 1.4 liters of air per second into the headphones and through a filter inside.

While the patent doesn't specify which particles the filter would be able to block out, Dyson claims that its current air purifiers capture 99.97% of allergens and pollutants "as small as 0.3 microns". For reference, a bacterium is usually about one micron, while pollen particles are 10 microns or more.

While the patent doesn't go into much detail about the kind of sound quality these cans could offer, it does describe a feedback microphone to allow for active noise cancellation. That could prove an important part of the design, particularly if the revolution of the propellers becomes loud.

There's no word either on whether these cans come with the built-in battery and Bluetooth connectivity that would make them pair of wireless headphones.

As with any patent, there's no guarantee that these air-filtering, noise-cancelling headphones will ever see the light of day. Dyson's plans for a wearable air purifier were first reported in 2018, when the company told Bloomberg that it doesn't discuss its products until they go into development:

“We’re constantly creating disruptive solutions to problems, which means we file a lot of patents,” a Dyson spokesman said in an email. “If and when a product is ready we’ll happily go through it but until then we don’t comment on our patents.”

In an age where many who live in big cities, particularly those affected by smog in places like like Beijing, Lahore, and New Delhi, are donning face masks for their daily commute to work, a wearable air filter that doubles up as a pair of noise-cancelling headphones could prove very popular indeed.