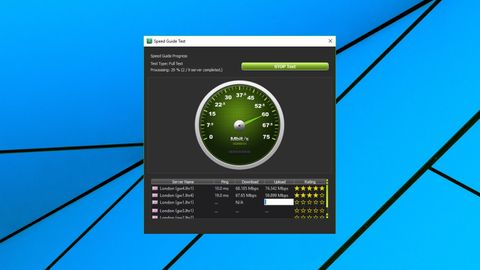 SlickVPN scores in some areas, but misses in many others, and overall it just doesn't have the features, the ease of use or the reliability of the top VPNs.

SlickVPN is a US-based provider with a mostly conventional list of VPN features: 150+ P2P-friendly servers in 40+ countries; OpenVPN, L2TP and PPTP support for setting up the service on almost anything; the ability to connect up to five devices simultaneously; payments via Bitcoin accepted, and a 30-day money-back guarantee if it all goes wrong.

The app situation is a little disappointing, with clients available for Windows and Mac only. Still, there are web setup guides covering Android, iOS, Chromebooks, some routers, Linux and more.

The company claims to offer a 'revolutionary' feature in its own HYDRA technology, but this looks similar to the multi-hop VPN technology available from NordVPN and a few others, where you connect to one server, your traffic is rerouted through the VPN network to another, and then makes its way to the destination. There's a theoretical benefit in that HYDRA makes it more difficult for others to track your activities, but it's not going to make a real difference for most people.

Pricing seems reasonable, with monthly plans costing a mid-range $10 a month, dropping to $5 a month over six months, or $4 over a year. You can get deals for less with some providers, especially if you sign up or two or three years, but that's a fair price for an annual plan.

The SlickVPN website states that the company keeps 'zero logs. zero', but there's little low-level detail about what's going on.

'To subscribe to our services, an account must be registered. We do not use this information to track any of your web activities while logged into our SlickVPN services.'

That's so vague, it's hard to decipher what it really means. 'We don't use any account information to track your activities when using the VPN?' Well, great, but we don't want to know what you use to track activities, we want to know whether you do it, or not. The 'zero logs' claim suggests not, but we were hoping the Privacy Policy would make the picture clearer, not more obscure.

Potential customers really shouldn't have to wade through cryptic small print to try and figure out what a VPN provider is doing. A few VPN providers (VyprVPN, TunnelBear, NordVPN and more) have put at least some of their systems through public audit, giving more reassurance that they're doing what they claim, and we hope other VPNs will decide to take the same approach.

Signing up with SlickVPN worked much as you'd expect: provide your email address, choose a plan (1, 6 or 12 months), pick a payment method (card, PayPal or Bitcoin), and hand over your cash in the usual way.

We downloaded the Windows client, and noticed that its version was a not-very-finished-sounding 0.2.6.1. Checking the installed files, we found the client executable was 17 months old. The OpenVPN.exe app - the open-source program used to make and manage your OpenVPN connections - was even older, its version 2.3.9 being released in December 2015. As that's such an important component of the client, there's no real excuse to ignore updates for that long.

The client itself is a little more interesting than you might expect. The Dashboard opens with the default location (the nearest server) but you can browse the full list of servers, sort them by city, country or Favorites. An optional speed test checks upload and download servers to identify the best choice for you, and you can connect to whatever you need with a double-click.

Protocol support is limited to OpenVPN TCP or UDP, unfortunately. Although the SlickVPN website advertises L2TP and PPTP support, you can only use these if you set them up manually, or try a different client.

More interesting features include the ability to have the client automatically allocate you a new IP address every few minutes, while experts can tweak the connection with custom OpenVPN commands.

There's clearly the basis of a good VPN client here, and even now it's easy to use and with some worthwhile features. But there's also a lot of work to do, and as the client hasn't seen an update in almost eighteen months, it seems unlikely SlickVPN has the resources to do it.

SlickVPN may not have the most sophisticated or up-to-date desktop clients, but it still performed very well in our kill switch tests. When we manually closed our OpenVPN connection, the client noticed immediately, blocked internet access, warned us with a desktop alert, and automatically restored our connection in a few seconds.

SlickVPN supports IP and DNS leak protection, and this also delivered during testing, with IPLeak, Dnsleak and other sites unable to find any DNS leaks.

The SlickVPN website claims it enables streaming from anywhere, and uses Netflix and BBC logos (amongst others) to hint at the services it supports, but our tests showed this wasn't always true. We couldn’t get into BBC iPlayer with any of SlickVPN's six UK servers, for instance, but the company did get us into US Netflix with one of our five test US locations.

There was more all-round success with the client's IP-shuffling feature. We set this up to automatically change our IP every five minutes, and it worked exactly as advertised, giving us a brand-new IP address on each occasion.

As we worked through our tests, we noticed regular connection issues. Some connections were very slow, others took multiple retries before they worked, one location (Bulgaria) never worked at all, and the VPN connection dropped, several times, for no apparent reason. We don't know the cause - maybe we were just unlucky - but there were more problems than we see in most VPN reviews.

Once we did connect, speeds were generally very good, with UK locations hitting a capable 60-68Mbps, and US speeds peaking at an excellent 60Mbps. The more distant servers had some issues - Australia was very inconsistent at 10-30Mbps, Indonesia lethargic at 4-8Mbps - but even these were just about usable for browsing, and overall SlickVPN performed fairly well.

SlickVPN isn't a bad service, but our connection problems were a concern, there's a distinct shortage of features, and the company doesn't appear to have the resources to address this any time soon. Keep looking - there are better places to spend your VPN cash.