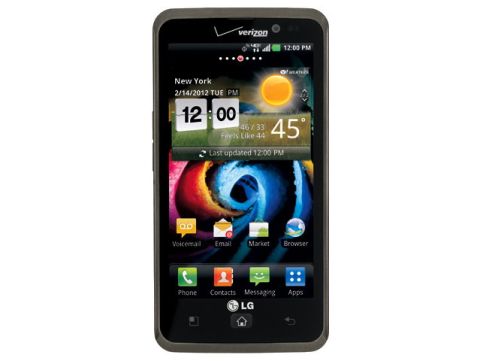 While the LG Spectrum has some standout features, it's outclassed by other Verizon 4G LTE handsets when it comes to important details like call quality, battery life, OS usability, and included version of Android.

Offering Verizon Wireless subscribers yet another glossy-looking 4G LTE smartphone to choose from, the LG Spectrum is a variant of the LG Optimus LTE, also seen in a different form on AT&T as the LG Nitro HD.

The LG Spectrum packs in a dual-core 1.5GHz Snapdragon processor and 1GB of RAM, which results in generally snappy performance around the menus and while using apps. However, the phone still runs Gingerbread (Android 2.3.5), with an Ice Cream Sandwich (4.0) upgrade expected at an undisclosed date.

What immediately grabs your attention is the crisp 4.5-inch display, which shines at 1280x720 resolution at 329 ppi, making it one of the sharpest screens on the market. It's protected by Gorilla Glass, which keeps the screen impressively free of scratches.

You'll have to look very closely to spot individual pixels, though in regular day-to-day use, the display impresses consistently whether viewing videos or browsing the web. It's a bit prone to fingerprints, but that's a small price to pay for a fantastic screen.

The LG Spectrum sports a slim and sleek build, at just 0.41-inches deep, with a front facing camera up top and three touch buttons at the bottom. The center Home button resembles a physical one due its silver sheen, but like the Menu and Back buttons around it, the phone must be powered on to use it.

On the back, you'll find a black-and-silver checkerboard pattern atop a very slick, shiny cover. Without any sort of tactile grip, it's sure to slide around in some users' hands, especially as the weather heats up, but it's an attractive and sturdy backing that can be pretty easily removed from a notch on the bottom of the phone.

Also on the back is the 8-megapixel camera lens, which is accompanied by a small light – the whole of which only slightly juts out from the rest of the cover. In addition to photos, the lens can also shoot HD video up to 1080p resolution.

Included on the LG Spectrum is 4GB of internal storage, but unlike some phones, we weren't able to access this space by connecting the phone to a computer. Luckily, the phone also comes with a 16GB microSD card, and it can accommodate 32GB cards as well. The card is found behind the back cover above the 1830 mAh battery and adjacent to the SIM card.

The LG Spectrum is available on Verizon Wireless for $199.99 with a two-year contract, with the full retail price for the phone listed at $589.99.