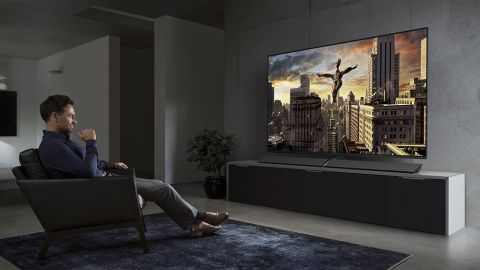 With its incredible black levels, professionally-tuned colour settings and interesting design, Panasonic's EZ1000U Series is a winner. While it lacks the Dolby Vision support offered by LG's OLED range, and is a little expensive, it's capable of some truly breathtaking images. It's a shame that it still uses the outdated Firefox OS, though.

Having launched its 'Master OLED' lineup of 4K televisions earlier this year, Panasonic is back with an updated EZ1000 range. Boasting incredible colours tuned by Hollywood professionals, the EZ1000 Series aims to give us the most accurate colour reproduction of any television on the market – exactly as intended by the filmmakers behind your favourite content.

Our review covers Panasonic's 65-inch model EZ1000U (TH-65EZ1000U), which is available now for $8,899, though Panasonic has also released a cheaper alternative in the TH-65EZ950, which carries a price of $6,599 and features the same OLED display but differs in design and lacks the EZ1000's standout Dynamic Blade Speaker. Both TVs perform identically otherwise.

The first thing you'll notice about the EZ1000's design is its striking Dynamic Blade Speaker, which sits in front of the television and is integrated into the television's stand. This kind of gives the set the illusion of floating above its speaker. As the blade is part of the stand, it can be detached from the television, which is handy if you want to wall mount the unit. That said, its cabling still needs to be connected to the speaker for it to work, and it will also need a stand to rest on.

As this OLED television does not require a backlight, the set itself is very thin (42mm at its thickest where the internals are kept, though the display itself is around the 1cm thickness mark), with a flat, minimalistic rear area that keeps the set looking attractive from all angles, should you choose not to stand it against a wall.

From the front, you'll find the EZ1000 to be fairly standard looking, with a thin black bezel that doesn't distract from the glorious visuals that the display is capable of. Panasonic was wise to make the bezel black, too – it practically disappears during darker films thanks to OLED's infinite contrast.

Curiously, Panasonic has opted to continue using Firefox OS for its smart TV interface in 2017, despite Mozilla (the company that created it) having completely ceased all development on its TV operating system a little under a year ago. Having tested Firefox OS on a number of occasions, it's easy to see why the company lost interest, as it's one of the more basic smart TV platforms around.

In terms of the overall experience of using Firefox OS to navigate the EZ1000's various functions, it could be said that the platform gets the job done, allowing you to use most of the important smart TV apps and some of Australia's catch-up services (9Now, Tenplay and PLUS7 apps are nowhere to be seen, though we were assured that content is available through FreeView Plus – unavailable for testing purposes).

Netflix and, surprisingly, Quickflix are available from the offset, as are YouTube, ABC iview and SBS On Demand, though Stan and Amazon Prime Video are missing-in-action (a representative stated that the latter was on its way to the platform). An Apps Market is available from the Firefox OS home screen, but aside from BigPond Movies and Dailymotion, most of the apps here are unknown by this reviewer (shout-out to the Creepster and Cloudio TV fans in the house).

That's not to say that Firefox OS is a complete loss – one of its standout features, dubbed Multi Window, allows you to simultaneously play content from two different sources, whether it be live television, Netflix or a game console.

Still, as a smart TV platform, Firefox OS fails to make the TV seem particularly intelligent. Android TV allows you to browse and install thousands of apps from the Google Play store – useful apps like VLC or Kodi, not to mention a number of emulator apps that let you run video game ROMs right from your television. By comparison, Firefox OS feels like it's an entire generation behind.

While the upscaling of 1080p content isn't the primary focus of the EZ1000, and not quite as big a selling point as it is for Sony's Bravia range, Panasonic's Studio Colour HCX2 4K Processor ensures that all content looks as best as it can.

Along with the incredibly true blacks that OLED is capable of, the EZ1000's HEXA Chroma Drive 4K Pro offers fantastic colour accuracy at all times.

After testing a number of 1080p Netflix shows on the EZ1000, we noticed very little aliasing around edges, with everything looking quite smooth for the most part. Unlike the Sony Bravia X9300E, the EZ1000 doesn't put quite as big an emphasis on upscaling SDR content, resulting in some radial banding from light sources with noticeable shading gradation. While this could just be a limitation of the source material, Sony's set did manage to smooth this out a little better.

Still, there's no denying the awesome wow-factor that OLED provides when it comes to achieving total blackness, regardless of the source content. A particularly dark scene from Batman v Superman's regular Blu-ray blew our minds.

Having just praised Batman v Superman's HD/SDR performance, the film's 4K/HDR presentation is on a whole other level of excellence.

Say what you will about the film's story, but when judged on the merits of its visuals, Batman v Superman on 4K Ultra HD Blu-ray is the ultimate OLED demo disc. We're talking deep, unparalleled black levels with whites and highlights that burn hot enough to make you squint from time to time.

Witness, for instance, the scene in which Batman confronts Superman for their ultimate night-time showdown, forcing the Man of Steel to use his heat vision to destroy some of the Dark Knight's nearby turrets. Superman's beams reach an almost pure white level of heat, with red light blooming off of them for added colour. Impressive for an OLED, which can seem dim compared to other panel technologies. That isn't the case with the EZ1000, which is capable of up to 1,000 nits of brightness.

Add to this the fiery explosions that the beams cause, as well as the rain and lightning crashing around the two superheroes, and what you have is a real OLED showstopper. This kind of scene would normally cause an LED panel's backlights to noticeably flash on an off when going from dark to light. Not so with OLED's self-lighting pixels – the black areas stay black here.

But there's more to the HCX2 4K Processor than simply pure blacks and scorching whites. This chip has been refined to take advantage of the one billion colours that OLED is capable of displaying, and it does so by opting to store a complete database of the colours on the processor itself.

You may have noticed the term '4K Pro HDR' bandied about in the advertisements surrounding Panasonic's TV range this year. Technically, it's not really a whole lot different from the standard 4K HDR seen on other tellies – you're getting the same number of pixels and the same 10-bit colour high-dynamic-range. The difference with 4K Pro HDR is that the colour settings on these TVs are pre-tuned to professional standards by a Hollywood colourist.

These settings are purported to provide a visual experience that's as close to the filmmaker's vision as possible (though we're not entirely sure how this is judged). But really, it's all a matter of preference. Some people will opt to adjust the TV's colour settings to their specific tastes, while others will stick with the pre-tuned settings. The only way to know what you want is to lay your own eyes on it.

The next piece of 4K HDR content we tested was Planet Earth II, which, as expected, looked stunning. Unlike Batman v Superman, Planet Earth II takes place mostly during the day, giving us a look at how well the EZ1000 performs when not relying on deep, dark blacks. Terrifically, it turns out.

Detail took centre stage here, with furs in particular looking exceptionally textured. Colours were vibrant and varied, whether the scene called for cooler blues and greys, or lush tropical greens and yellows. Unsurprisingly, the infinite contrast afforded by OLED gave each scene a rich palette and lifelike appearance.

Just like with our review of the Sony Bravia X9300E, we got a chance to test the EZ1000 with the Scarlett Johansson film Lucy on 4K Ultra HD Blu-ray. Similarly, we were amazed at the picture quality before our eyes, only this time, we also had the added bonus of OLED's perfect black levels. Suffice to say, this is how all movies should be experienced. Skin and clothing still looked incredible, though the disc's highlights popped even more when laid across darker backgrounds.

Aside from being rather fetching to look at, the Dynamic Blade Speaker that comes with the EZ1000 also sounds pretty good, too. With a total speaker output of 80W (20W x 2 + 20W x 2) and the inclusion of two tweeters, four mid-range speakers, eight woofers and a quad passive radiator, the EZ1000 is capable of some impressively dynamic audio, with clean, clear dialogue.

If you're not willing to grab a soundbar or DTS hi-fi system, the Dynamic Blade Speaker is definitely adequate. That said, if you're willing to spend upwards of $6,599 for an OLED television, you're going to want good sound system to compliment its amazing visuals.

If you're after similarly perfect blacks and exceptional brightness, the recently reviewed LG OLED65E7 is available in Australia at a retail price of $7,999 – that's $900 cheaper than the EZ1000 with the added bonus of Dolby Vision support thrown in and a vastly superior OS.

You could also opt for Panasonic's more affordable OLED, the TH-65EZ950, though it lacks the standout Dynamic Blade Speaker and still has the same outdated OS.

While we can't get behind the decision to use the Firefox OS smart TV platform, given that it was abandoned by its developers a year ago, there's plenty to love about Panasonic's new flagship OLED. Admittedly, it's pricier than some of the other OLED options on the market, namely LG's Dolby Vision-supporting OLED65E7, but if you can track down a great deal on the EZ1000U, you won't be disappointed. Alternatively, if you don't care about the Dynamic Blade Speaker, you can also opt for Panasonic's own TH-65EZ950 OLED, which is much more affordable.