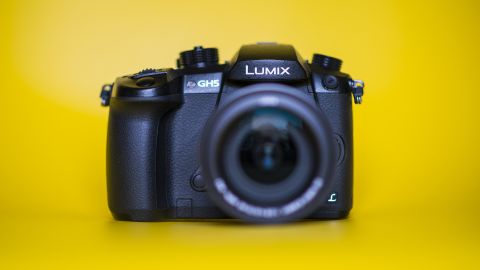 While the last couple of GH-series cameras have felt a little like video cameras masquerading as stills camera, the Panasonic Lumix GH5 is a much more rounded piece of kit. It's certainly one of the best 4K camera solutions out there, if not the best, before you start considering dedicated professional video cameras, and that video capability is backed up by a great set of features for the stills photographer.

The Lumix GH5 is the latest in the line of Panasonic's top-of-the-range GH series of mirrorless cameras, which over the years have carved out a niche for themselves among videographers thanks to their breadth of movie-making features.

The current GH4 was launched back at the start of 2014, and has been starting to look a little dated when lined up against some strong competition.

Panasonic is hoping its latest model will not only re-establish the brand as the number choice for the professional videographer, but will also appeal to a wider market of enthusiast photographers looking for a highly capable camera that can shoot great stills and movie footage. Let's take a closer look…

As we've seen on some other recent Micro Four Third cameras, the Panasonic Lumix GH5 features a 20.3MP sensor that forgoes a low pass filter, which should see even more detail squeezed out from the chip.

While the resolution matches that of the Lumix GX8, Panasonic says it’s a different sensor and claims it'll yield the best image quality yet from a Lumix camera.

There's also a new Venus Engine, with 1.66x faster processing power thanks to an additional processing core, with Panasonic promising more natural, true-to-life images with better noise control. This should enable the GH5 to effectively correct for artefacts such as unnatural white edges, as well as reducing fringing and over-sharpening.

The GH5’s sensitivity range improves on the GH4’s by a stop at the bottom end of the range, running from ISO100-25,600 compared to 200-25,600 on the GH4. The increase in base sensitivity is welcome, especially if you want to take advantage of some of those fast Micro Four Thirds prime lenses in bright conditions, where an extra stop can be a help.

However, it would have been nice to have seen this extended even further, especially at the higher end of the range, where the GH5 loses out to rivals like the Nikon D500 and Sony Alpha A7S II.

The Lumix GH5's electronic viewfinder sees a big jump in quality from the GH4's,  up to a staggering 3,680,000-dot resolution and 0.76x magnification, while the vari-angle display has also been improved, with the 3.2-inch touchscreen featuring a resolution of 1,620,000 dots. The display also employs Panasonic’s WhiteMagic technology for increased brightness.

Before we get into the nitty gritty of the Panasonic GH5’s video capabilities, it’s worth noting that its specs offer some advantages for stills photographers too.

Much has been made of the ability to extract 8MP still images from 4K footage in the past, but the GH5 takes this idea even further, with the GH5 featuring what Panasonic is calling '6K Photo'.

This means it will be possible to extract 18MP still images (at either 4:3 or 3:2 ratios) from ultra-high-quality video footage at 30fps at an unlimited burst rate. Very impressive stuff.

The GH5 will also allow '4K Photo' extraction, but this will now be possible from footage captured at 60fps – staggering when you consider that a $6,000/£5,000 Canon EOS-1D X Mark II has a maximum burst rate of 14fps (admittedly this is from a 20.2MP full-frame sensor).

Those who want to shoot more traditionally, and take advantage of the full arsenal of pixels the GH5 has to offer, can shoot at up to 12fps with focus locked at the first shot, or 9fps with continuous AF – that's with a 100-shot raw buffer too.

Finally, there's built-in Wi-Fi and NFC, as well as a low-energy Bluetooth connection that establishes a permanent connection between the camera and your smart device for easy transfer of images.

While Panasonic is marketing the Lumix GH5 at both pro videographers and enthusiast photographers, most units are probably going to fall into the hands of the former, and as such it's no surprise to see the GH5 sporting an impressive movie spec.

This means that rather than using a cropped area of the sensor when shooting 4K as was the case with the GH4, the GH5 uses the entire width of the chip and then downsamples the footage in-camera. This also means that framing won’t be cropped, and you’ll be able to use your lenses as if you’re shooting stills.

That's not all, as the GH5 offers color subsampling at 4:2:2 and a color depth of 10-bit, delivering greater color information and richer graduations. The GH5 also offers live output to external recorders such as Apple ProRes via HDMI, as well as simultaneous internal recording.

Finally, there's an XLR Microphone adapter for professional video production, which attaches via the hotshoe and offers two XLR jacks with physical switches and dials.

That's certainly a comprehensive video spec, but Panasonic is also planning to introduce a number of firmware updates over the coming months to bolster the GH5's recording capabilities even further.