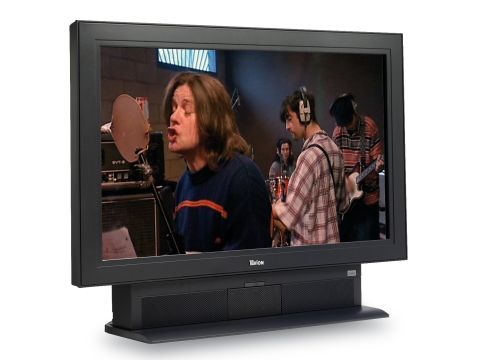 Looks nasty, but HD pictures are pleasing, although standard-def gets a rough ride

While you may not recognise the manufacturer's name, you'll recognise the outlet if you've ever been compelled to indulge in some cut- price shopping. This HD-ready 32-inch LCD TV from Tevion is exclusively available from bargain-basement high street supermarket Aldi. Not surprising as Tevion is an Aldi brand of rebadged electronics products.

This just goes to show how the high-definition revolution is permeating every aspect of shopping, and it's sets at this price that are contributing to the increased affordability of many of the gorgeous hi-def models from major manufacturers.

At this price you'd be forgiven for thinking the worse. And things don't start well. The MD31134 looks terrible. The build quality is cheap to the touch and you'd expect the whole thing to flutter away in the breeze if you left the window open.

Still, its specification improves things somewhat, as it's HD-ready with a screen resolution of 1366 x 768. There are two analogue tuners, which isn't that great, considering the great analogue shutdown looming ever larger. This means that you'll have to organise some external set-top box: either a Freeview adapter, satellite or cable receiver.

Connectivity is functional. The highlight here is its single HDMI, and it also has two Scarts (both of which support S-video, RGB and standard-def component video). There are also two inputs for analogue stereo audio to accompany the VGA socket, or the HDMI socket if you're using an adapted DVI cable for your high-definition signal. But don't hold your breath for features.

There are no upscaling powers for standard-definition feeds, but despite that our test DVD of 24 Hour Party People was rendered with better quality that we had a right to anticipate. Crowd scenes were handled with great detail and the pictures have a believable quality. There was little artefacting to be seen and colours were reasonable enough. Criticisms are inevitably made in the areas of contrast and skin tones.

Dark scenes aren't that clear to watch and actors' skin looks a little weird too. Standard-definition pictures (including ones from the decidedly average analogue tuners) can be rectified to some degree by using noise reduction and utilising the preset brightness and contrast modes.

Setting up our Sky HD box (using the HDMI) for a glance at Planet Earth also provided us with better than anticipated results. As is to be expected with a high-definition feed, the overall sense of scale, detail and impressiveness was ramped up considerably. Detail is excellent and this budget screen even manages to put in a decent performance with high-speed camera pans, revealing little in the way of motion smearing.

The vivacity and definition of the colour palette is also improved by this hi-def switch - we were frankly amazed that this TV was torpedoing our budget prejudices. The speakers are average, though they lacked the power required for high-octane movie soundtracks.

The MD31134 is no Sony Bravia, but the pictures are as respectable as a budget set can muster and better than some of the other offerings in this group test. If you want to try HD without breaking the bank, then it may be worth an audition.