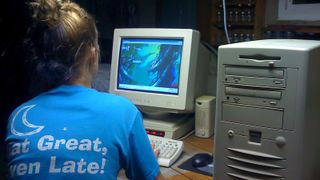 Twenty years ago today, Windows 98 was unleashed onto the world. At the time, Microsoft was a very different company, with Bill Gates still CEO – he didn’t hand over the reins to Steve Ballmer until the year 2000 rolled around (although he did make the bombastic Ballmer president of Microsoft in 1998, just a month after the fresh OS was released).

Windows 98 launched accompanied by much fanfare on June 25, 1998, becoming available in over 40 countries across the globe, and going on sale in more than 12,000 retail outlets in the US.

This was the much-awaited follow-up to Windows 95, which had been released three years previously and had made some huge changes to usher in the era of the contemporary Windows desktop OS. These changes included going 32-bit, booting from scratch (as opposed to being ‘manually’ fired up from DOS), and bringing in the familiar user interface which featured the Start menu and taskbar.

So, back in the day, Windows 98 had a lot to live up to. And by its very nature this OS was more about refining and honing Windows 95, rather than making massive changes to Microsoft’s desktop platform.

That said, there are definitely areas where Windows 98 made a positive impact, and in honor of its 20th birthday we’re going to look back at those highlights – as well as its shakier points – and weigh up whether or not this operating system’s anniversary is truly a cause for celebration.

One of the most important changes Windows 98 made was to implement a whole host of tweaks to address the various bugs which had scuttled around the inner workings of Windows 95.

There were lots of bug fixes, and performance was smoothed over in general, which was obviously welcome – although something that really should have been included in Windows 95 in the first place. So, not so much a positive as the removal of a negative, but still a good thing nonetheless.

Windows 98 was certainly a more stable operating system, and it also improved things on the hardware compatibility front with USB support, opening up a whole new world of peripherals for users. While, technically, Windows 95 did kick-off USB support with later versions, it was hardly reliable.

Side note: one of the most famous tech demo fails was Bill Gates showing off Windows 98 by attempting to plug-and-play with a scanner, except it all goes horribly wrong – on live TV no less.

Although, as Microsoft’s CEO at the time swiftly points out (as you can see in the video below), this was a pre-shipping copy of the OS. USB support got better with Windows 98, and was further refined with Windows 98 SE (which stood for Second Edition – the updated version released in 1999 which also improved things on the networking side with elements like internet connection sharing).

So, Windows 98 felt better – more streamlined and stable than its predecessor – but did it look better? On the interface front, as we mentioned before, Windows 95 made the really big change with the introduction of what we know as the contemporary Windows-style UI built around the Start menu. And Windows 98 simply kept that core interface, by and large, but there were certainly changes made by Microsoft.

The major move was making the desktop interface more web-like, allowing for a web page-style presentation in certain elements of the UI, giving you, for example, links for help and support embedded in the Control Panel in case you got stuck.

Single-clicking on an icon could fire up an app or trigger a function, mirroring the fact that you only needed to click once on anything in your browser to activate it. Desktop widgets that could be updated in real-time with info pulled from the web became a thing, and this invasion of the web on the desktop was really all about Microsoft integrating its Internet Explorer 4.0 browser into the OS.

Indeed, if you installed Internet Explorer 4.0 on a Windows 95 machine, you’d be using much the same UI; so this was hardly revolutionary for Windows 98. Also note that you could plump for a classic desktop in Windows 98, and you didn’t have to turn all the web gubbins on – you could just run with some custom elements of the latter (or none at all).

One strength here was how you could tailor the interface to your liking, which was just as well, as a number users at the time felt that the web stuff could get in the way (particularly some of the more intrusive elements).

Another quick aside: this direct integration of Internet Explorer into Windows led to accusations of Microsoft unfairly leveraging its own web browser over rival efforts (like Netscape), and a big anti-trust action was launched against the software giant later in 1998 (one that nearly resulted in the company being forcibly split into two). Certainly there were major question marks over Microsoft’s attitude here, and accusations that the firm had become the bully of the software world.

It’s also interesting to recall that Windows Update was first introduced with Windows 98, notifying the user of critical security updates, new drivers and other optional bits and pieces. It was pretty basic, though, in this initial incarnation. That said, at least it didn’t force updates down your throat without any ability to delay them like Windows 10 (at least without upgrading to the Pro version).

Windows 98 further ushered in a number of new system maintenance tools, including utilities to keep your hard disk running more smoothly, such as Disk Cleanup, which got rid of temporary files and other unnecessary clutter. The OS also allowed users to switch their hard drive to FAT32 format, freeing up some more room on the disk in the process.

This was also the first version of Microsoft’s OS to support multiple monitors, which was a pretty revolutionary feature two decades ago.

Broadly speaking, Windows 98 was well-received at the time it was released, but let’s return to our central question on the anniversary of the operating system: is it a piece of work worth celebrating? That’s a tricky call, really.

Looking back at what we’ve highlighted here, there’s clearly nothing earth-shattering about what Windows 98 achieved. But, while the operating system didn’t do a huge amount in and of itself, it was building on the foundations of Windows 95, which was a more transformational project that moved us on a long way from the far more limited days of Windows 3.1.

What Windows 98 really represented was a stepping stone, followed by a second step with Windows 98 SE – the substantially tweaked Second Edition of the OS – which truly shaped and refined what Windows 95 started.

So crack open some champagne, a beer, or your beverage of choice, and raise a toast to Windows 98 two decades on from its launch. Perhaps this operating system’s biggest problem, when it comes to historical perspective, is that it’s overshadowed by what came shortly after. Namely Windows XP, which arrived in 2001 and is certainly more fondly remembered – and indeed still (unwisely) used by some folks even today.