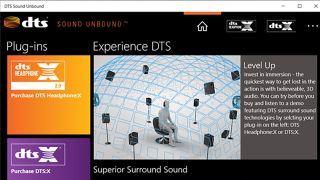 Windows 10 has introduced support for DTS:X and more immersive audio for movies and games, while bringing quality surround sound to stereo headphones – although this is all still in testing.

This functionality is delivered by the DTS Sound Unbound app which brings support for DTS:X and DTS Headphone:X to your PC (and eventually Xbox, too). These new DTS:X technologies work together with Microsoft’s Spatial Sound framework in Windows 10.

There are a few things to note here: the free offering only allows a simple trial, and the app is still a work in progress anyway, plus you’ll need to be a Windows 10 tester.

Specifically you’ll need to be running at least build 18898 (released back in May) or better, which is the preview for the major Windows 10 update destined to land in the first half of 2020.

With the app installed, you’ll be able to enjoy DTS:X playback on your PC, and DTS Headphone:X can turn any old pair of stereo headphones into an immersive surround sound experience. And theoretically, it could have a very practical use in terms of determining where sounds are coming from in the game – above you, or behind you, for example – which can be vital info in a shooter.

Not all headphones seem to be working currently, but as we already mentioned, that’s not surprising as this is still in testing. Eventually, all wired and wireless headphones should be supported.

In a reply to a Microsoft Store review, DTS Inc noted that a public launch will be coming later this year, and that it’s working closely with Microsoft to ensure the system is fully honed before release.

The company said: “We are currently testing that everything works as part of an insider release, before we go to the wider public to make sure that when you can access it, we truly do deliver believable audio for gaming.”

Another point to note is currently the app only supports a sample rate of 16-bit 48,000Hz, but the developer is working to allow users to access different (better quality) rates in the future.

Of course, there are already options for Spatial Sound under Windows 10, including Windows Sonic and Dolby Atmos. The obvious hope is that DTS Sound Unbound manages to outdo the quality of these alternative virtual surround solutions, or at least provides another option to explore.

Bear in mind that arguably, at least with some games where a lot of work has been done on the audio engine, you might be better off with the in-game sound in terms of positional audio rather than a third-party virtual surround affair. More choice is always better, though…