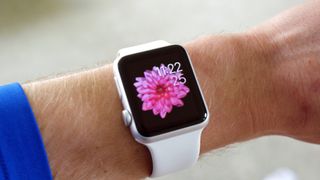 Apple stuck to its guns in deciding not to reveal Apple Watch sales numbers during its fiscal Q3 2015 earnings report and investors call today, citing concerns competitors could use the metrics to their advantage.

Still, the Cupertino company did offer some clues as to how the brand-new wearable is doing.

CEO Tim Cook said the Watch launch got off to "to a great start," but more importantly that Apple Watch sales exceeded internal expectations.

One big insight into how the Watch is faring lays in revenue for "Other Products," where Apple lumps together the Apple Watch with Apple TV, Beats Electronics, iPod, and Apple-branded and third-party accessories. Revenue for these products was up by nearly $952 million from the quarter previous (when the Apple Watch wasn't on sale), to $2.64 billion in Q3.

CFO Luca Maestri said during the investors call that the Apple Watch accounted "for more than 100% of growth in category," which includes products (like the iPod) that experienced shrinking sales. So, Watch sales could have reached around $1 billion in Q3, though there's no way to know just how many units were sold since the device is available at varying price points.

Maestri did tell The New York Times that in the Watch's first nine weeks on the market, its sales beat out the amount of iPhones and iPads sold during those devices' first nine weeks of availability. According to the AP, Apple sold 1 million iPhones in its first 10-plus weeks, while the iPad sold 2 million units in its first 60 days.

It's not likely we'll hear Apple Watch sales specifics anytime soon, something that will no doubt continue to irk journalists, analysts, investors and interested consumers,.

Apple seems satisfied with the Watch's start and its decision not to reveal specifics, despite external pressure to do so.

Cook said on the investors call that with over 8,500 third-party Watch apps and Watch OS 2 heading to developers, the Watch experience is only going to continue to improve.

The CEO also said the company expects the Watch to be one of the biggest gifts over the holiday period, and that it plans to expand the channel in preparation.

He also touted high customer satisfaction rate (97%) as a sign the Watch is poised for long-term success.