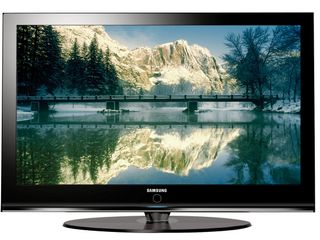 Samsung introduced a range of 1080p plasmas at CES, including this 50-inch model

Samsung has launched at new range of 1080p plasma TVs - a first for the Korean electronics giant.

The flat panel displays all support the latest high definition TV (HDTV) standards including high-bit colour ranges - for more realistic on-screen images. They also feature HDMI 1.3 - the latest version of the 'digital scart' socket that enables lossless audio and video transfer between devices like an HD DVD or Blu-ray player and a flat-panel TV.

Of all the Samsung sets on show the HT-P589W is this year's flagship. The 58-inch 1080p sports an 802.11n Wi-Fi receiver so you can stream content to it from a variety of audio and video sources. It also comes with built-in Bluetooth so you can use wireless headphones too.

Other key features three HDMI sockets and something Samsung calls Wiselink - essentially USB 2.0 connections that enable you to hook up a camcorder or other compatible device and view its content on the TV. Finally the HT-P589W features Samsung's own FilterBright 2 Plus technology that helps eliminate unwanted reflections.

The other sets in Samsung's line-up share many of the HT-P589W's features. Here's a quick rundown:

All of Samsung's plasmas are expected to go on sale this year, with the HT-P5894W surfacing in September for $5,700 (£3,000). The company has still to confirm UK launch dates and pricing.