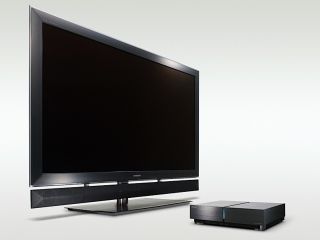 At the end of September, TechRadar revealed that Toshiba's plans for its uber-powerful Cell TV were on track, but now the company has released official details about the television just before its official announcement at CEATEC in Japan.

When it comes to sound, a seven-speaker soundbar nestles itself at the bottom of the TV.

Just to prove that all mod-cons are catered for, Toshiba is giving the Regza Cell TV an Opera-based browser for all your internet needs and DLNA connectivity.

To push the Cell TV far above what its peers can do in terms of performance, the Cell TV will be capable of recording eight simultaneous video feeds.

To house all of this content, a 3TB hard-drive is included, 2TB of which is dedicated to time-shift recording. This equates to 26 hours of video viewing.

The TV is powered by the PS3 Cell processer – hence the name. The TV will also come with its own set-top box.

Toshiba also revealed it has a number of Cell TV concepts in the works, including a 3D version and a 4K2K which upconverts 1080p to 3840 x 2160 resolution.

Finally, there's also a 46-inch version in the works, which will house the Cell TV television tuner and hard-disk drive. A 37-inch version is also mooted. This will apparently act as a home media server.

The first iteration of the Cell TV, dubbed the Cell Regza 55X1 will be out in December in Japan for the expected price of 1 million yen. This equates to around £6,900. Better start saving now.