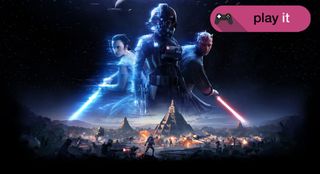 Update: In the face of a controversy that's point blank refusing to budge, EA has decided to temporarily remove microtransactions from the game while it reworks them. We'll be interested to see what form they take when they return, though in an ideal world they'd be gone for good.

Read on for our full review of the game that was written prior to this announcement.

Controversy is difficult to thing to shed, and it’s something that’s impossible to avoid when discussing Star Wars Battlefront 2 in any kind of depth. Microtransactions – or loot boxes as the cool kids know them now – are a fundamental part of the game’s progression system, so the advantage of paying real-world money for better gear and abilities looms large.

However, it’s just as impossible to ignore how far Swedish studio DICE has improved on the 2015 original game. Battlefront was the most authentic Star Wars game to date two years ago, even if a barebones approach to progression and core multiplayer systems left it feeling a little hollow in places. Not to mention the painful lack of any single-player content.

Battlefront 2 rights those wrongs, and then some. Running on DICE’s frighteningly beautiful Frostbite engine, it’s one of the most graphically accomplished games we’ve seen running on current-gen tech. From the lush forests of Endor to the cold glimmer of space, you’ve never seen Star Wars look this good away from the silver screen.

We've now played through the game's single-player campaign in its entirety, and we'll be spending some time with its multiplayer over the coming days before we update this review with our final verdict.

Developed by Motive Studios (the studio built around former Assassin’s Creed exec Jade Raymond), the story campaign offers an experience that’s both authentically Star Wars and consistently exciting. At the same time it also makes a convincing case that single-player, narrative-driven games set in a universe of lightsabers, TIE Fighters and Salacious Crumb still have a place in 2017.

Serving partly as a quasi-tutorial for the game’s wider multiplayer systems – enabling you to unlock and select weapons and Star Cards (which offer access to interchangeable, cooldown-affected abilities) – the short-but-sweet campaign weaves a canonical story that takes you into the heart of the main saga, through its immediate aftermath and beyond.

In the shoes of Iden Versio, a brilliant and coldly efficient commander of an elite Imperial special forces team, you’ll explore a Star Wars universe reeling from the end of Return Of The Jedi. In Versio, we get a female protagonist with depth; a character willing to question the ideals and figures that have helped make her the warrior she is. Hats off to actress Janina Gavankar for making a ‘villain’ likeable for all the right reasons.

In fact, the rest of the cast puts in some decent performances, too – even those doing passable imitations of your favorite Star Wars characters (seriously EA, could you not afford Mark Hamill?). It’s just a bit of shame that there’s very little story to hold it all together. You’ll get to explore plenty of new (and familiar) locales, and take part in many an important canonical event, but the campaign never truly manages to rise beyond the objective-based nature of its multiplayer DNA.

There are also some rather bizarre narrative beats that fall painfully flat, mainly due to certain characters undergoing shifts in persona that make very little sense. Since we’re wading into waters infested with spoilers we’ll back away slowly, but you’ll know these moments when you reach them – and likely end up scratching your head as much as we did.

X-wing and a prayer

So while the campaign’s core mechanics sometimes struggle to shake off the restrictions of working within the confines of multiplayer, Battlefront 2 still offers up a tasty smorgasbord of cinematic moments. Leaping into a TIE Fighter and barrelling into space-based dogfights is probably the closest we’ll ever get to another Rogue Squadron (something made all the more satisfying now that Criterion – the other studio helping out DICE with BF2 – has streamlined the flying model to make it far more intuitive).

There’s an attempt to introduce stealth a few times, too (which doesn’t work as it’s simply inapplicable elsewhere), but it’s when Motive combines multiplayer modes in a narrative setting that the campaign comes into its own. One mission sees you flying a starfighter, engaging in dogfights before landing and entering a firefight on the ground. You then leap back into your ship and do it all over again. It’s everything we’ve ever wanted Battlefront to be – it’s just a shame BF2 doesn’t do it more.

Multiplayer is the real star of the show here, and in its sophomore iteration, DICE has built an online experience that feels like Star Wars as much as it authentically looks like it. Galactic Assault, the big 40-player, objective-based mode that took pride of place in the first game returns, and it’s just as much a must-play experience as ever. With huge, branching maps it’s here that the much-needed changes to matchmaking are truly felt.

Classes – the bread and butter of pretty much every other shooter worth its salt – have finally been introduced, fostering a distinct sense of teamwork that permeates practically every mode of BF2. The game actively wants you to play as a team, even going so far as rewarding you with extra in-game points just for completing objectives or scoring kills while in the vicinity of the squad you spawn with.

It’s a basic concept, but knowing when to use Assault, Heavy, Specialist or Officer and when to take advantage of their unique abilities (such as the Officer’s power of healing) simply reinforces the objective-based nature of the five core multiplayer modes. It also feeds into a far more generous outlay of points – and since these points can be banked and used to access iconic ships or characters (such as Luke Skywalker, Kylo Ren and Iden Versio from the campaign) you’ll likely be able to play as a Hero/Villain or more powerful ship at least once every match.

It should be noted that you need to purchase many of these characters first before you can spend your points on them, and the review code provided to us had some of the most loved characters from the saga locked behind lofty prices (60,000 credits for either Darth Vader or Luke Skywalker). In the face of overwhelming negative responses EA has decided to slash these prices by 75%, making every Hero or Villain far easier to purchase. It’s a boon for new adopters, but it’s telling that EA and DICE went ahead with these pricings even after the extensive reaction to its beta.

Back to the good stuff. Starfighter Assault – the new take on vehicle-only dogfights – ups the objective-based nature of the rest of the game and captures the intense, cinematic action glimpsed in what was easily some of standout moments from the campaign. Making the team-based duals more than just death matches elevates the whole experience, and when you consider that DICE has included all three eras there’s a good chance you might lose your tiny mind when you earn enough points to jump into Slave-1 or (deep breath) the Millennium Falcon itself.

Whether you’re fighting through the glossy corridors and hangars of Death Star II or unleashing the Force as Rey in the bowels of a crashed Star Destroyer on Jakku, you’re constantly drinking in how gorgeous BF2 looks even when running on a vanilla PS4 or Xbox One. It’s an authenticity that trumps even the sheen and shine of the first game, offering up an experience that’s as immersive and enchanting as the films that ultimately inspire it at every turn.

It’s just a shame that the rest of BF2’s invigorating package is dumbed down with a needlessly convoluted and ultimately slow progression system. Star Cards – the returning collectible cards that offer equippable abilities and gear – are the real root of the problem. These cards are tied to each class, so the more cards you have for a given class, the more you can equip yourself (thus making you more formidable). These cards come in different rarities and can be upgraded and even crafted, thus changing their potency.

This is where the loot boxes – or Supply Crates as they’re known in BF2 – come in. By juggling three different currencies (credits earned through play, salvage found in crates and crystals bought with real money) you open up BF2’s matchmaking to imbalance, as those forking out real money – and you can fork out anything from $5 to $100 – for more cards are ultimately paying their way to a tactical advantage in battle.

Microtransactions are clearly here to stay, and the fact that they're embedded so deeply in BF2’s core experience shows how committed EA is to their presence; but coupling this with a progression setup that’s so needlessly complicated leaves multiplayer feeling uneven.

Star Wars Battlefront 2 is its own worst enemy. On the one hand, DICE has created one of the most immersive and exciting Star Wars games ever made. It’s pure Star Wars magic, and it’ll make your nostalgia sing with its vibrant authenticity (as well as tickling that need for a slick and robust shooter). But as a vanguard for the growing influence of microtransactions in £50/$60 games, it marrs its own package by tying an already confused levelling system with an over-reliance on purchased loot.

This game was reviewed on Xbox One.

Check back shortly for our final verdict on Battlefront 2’s multiplayer modes, and those loot boxes.

TechRadar's review system scores games as 'Don't Play It', 'Play It' and 'Play It Now', the last of which is the highest score we can give. A 'Play It' score suggests a solid game with some flaws, but the written review will reveal the exact justifications.