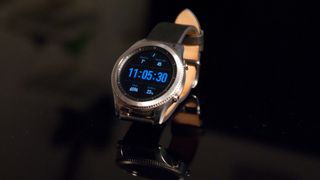 Whether it’s called the Samsung Gear S4 or the Galaxy Watch, it looks very likely that Samsung has a new smartwatch in the works, and we’ve now heard that it could combat one of the main issues with smartwatches; battery life.

That’s a significant difference and could mean you’ll only be charging the Gear S4 twice a week, given that in our review we found we could often get 2-3 days of life from the Samsung Gear S3. Though of course, a bigger battery doesn’t always mean longer life, as it depends what else has changed.

Get it in gold

And that’s not the only Samsung Gear S4 leak we have for you, as according to SamMobile the upcoming wearable will be available in silver, gold and black shades.

That said, they add that Samsung will launch two variants of the Gear S4 – likely a sporty version and a dressy version, much as it did with the Samsung Gear S3 Classic and S3 Frontier, and that only one of these versions will be available in gold. It’s likely then that it will be the more stylish, less sporty model that gets the gold shade.

Of course, this is all just rumors for now, so take it with the appropriate pinch of salt, but none of these claims seem unbelievable.