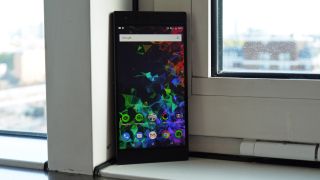 The gaming-centric Razer Phone 2 is official, and it brings a range of minor upgrades over the original Razer Phone.

Razer doesn't want you thinking about its new handset as a gaming phone though. Rather, it claims this is a flagship smartphone that also happens to be an excellent gaming machine.

With a 5.7-inch UltraMotion display with a 120Hz refresh rate, Snapdragon 845 chipset, 8GB of RAM, 64GB of storage, dual rear cameras and a 4,000mAh battery it appears to be well equipped to tackle today's flagships.

Razer has also added a glass rear and wireless charging to the handset this year, as well as improving the rear cameras and increase the screen brightness by 50% to 645 nits.

There are enough upgrades to warrant a new device, but it feels like this is more of a "S" variant rather than a whole new numerical device.

The most eye-catching new feature however is the light-up Chroma logo on the rear of the handset.

If can be lit up in your choice of over 16.8 million colors via an app that comes pre-installed on the Razer Phone 2, and you can even make it "breath" if you wish.

In Australia, the phone will initially be an on-plan Optus exclusive, although Razer has confirmed that the option to buy the handset outright will come at a later stage.

The Razer Phone 2's official release date will be sometime in October, but we’re waiting to hear more details on this from Razer.