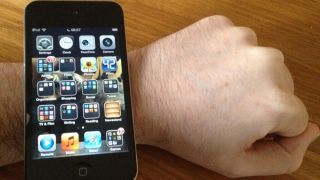 Not quite this big

Most reports agree that we'll see the iWatch debut alongside the iPhone 6 later this year.

And the latest rumor, from CNBC, says the Apple wearable will enter mass production at Taiwanese manufacturer Quanta Computer in July.

Quanta was rumored to be making the iWatch back in April, though to be fair that same rumor also said the smartwatch might launch as early as this summer.

A September or October iWatch release seems more likely, but more importantly this report says the iWatch will sport a 2.5-inch screen.

That 2.5-inch display, reportedly being produced exclusively by LG, will be slightly rectangular, the same source told the site.

The iWatch will also reportedly have a pulse sensor; not a stretch, considering it lives on your wrist.

A previous report said the iWatch will launch initially in a batch of 10 million, but this latest rumor says Apple expects to ship as many as 50 million smartwatches in its first year on the market.

That same previous source said Apple will pass on equipping the iWatch with a sapphire display in favor of OLED so it can save all the sapphire for its big 5.5-inch iPhone 6.

This new one doesn't say anything about the iWatch's display one war or the other, so it seems that (like everything else about the wearable) remains up in the air.