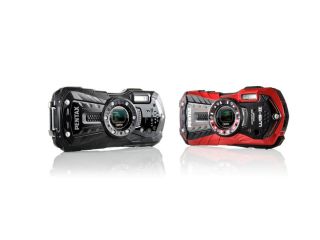 Pentax has unveiled an upgrade to its rugged compact camera

Pentax has unveiled a pair of tough compact cameras, to follow on from its Optio WG-1 rugged compact which was released last year.

The WG2 will be available as a standard version, with a special edition WG2-GPS featuring (surprisingly), GPS technology.

Sensitivity on the camera runs up to ISO 6400, while a new processing engine promises to help deliver noise-free images. Handheld Night Snap mode enables users to capture four images of the same scene in one shot, which are then combined to produce a single, apparently blur-free composite image.

The camera's 'tough' credentials include waterproofing down to 12 metres, drop proofing from 1.5 metres and the ability to withstand temperatures down to -10 degrees. It is also crushproof up to weights of 100 kgf.

Full 1080p HD video recording is available at 30fps on the camera, while slow motion playback of movie clips can be viewed via the back screen, plus an interval movie function is also included.

A new large 3 inch LCD monitor with a 16:9 aspect ratio and 460k dot resolution can be found on the back of the camera. It features Anti-Reflection coating to help minimise glare and reflections even in bright sunshine.

As on the WG1, the WG2 is equipped with a digital microscope. By positioning six LED macro lights around the circumference of the lens barrel, brighter illumination for macro shooting when the Digital Microscope mode is selected can be used.

The special edition version of the camera, the WG2-GPS comes equipped with an upgraded GPS module. This automatically creates log data and stores it as KML file on the SD memory card. Position data can also be stored to help plot maps on applications such as Google Maps.

GPS also has the ability to correct the built-in cock to automatically match the local time of the shooting location.

Available on both cameras, Auto Picture mode has the ability to automatically select the most appropriate shooting mode from a choice of 16. High-speed Face Detection is able to capture up to 32 faces in approximately 0.03 seconds, while Smile Capture is also included.